VMware vSphere leverages the power of virtualization to transform datacenters into simplified cloud computing infrastructures and enables IT organizations to deliver flexible and reliable IT services. VMware vSphere virtualizes and aggregates the underlying physical hardware resources across multiple systems and provides pools of virtual resources to the datacenter.

As a cloud operating system, VMware vSphere manages large collections of infrastructure (such as CPUs, storage, and networking) as a seamless and dynamic operating environment, and also manages the complexity of a data center.

To enrich your career and become a VMware vSphere professional, visit Tekslate, the global online training platform:" VMware vSphere Training". This course will help you achieve excellence in this field.

-VMware vCompute—the VMware capabilities that abstract away from underlying disparate server resources. vCompute services aggregate these resources across many discrete servers and assign them to applications.

-VMware vStorage—the set of technologies that enables the most efficient use and management of storage in virtual environments.

-VMware vNetwork—the set of technologies that simplify and enhance networking in virtual environments.

Application Services are the set of services provided to ensure availability, security, and scalability for applications. Examples include HA and Fault Tolerance.

VMware vCenter Server provides a single point of control of the datacenter. It provides essential datacenter services such as access control, performance monitoring, and configuration. 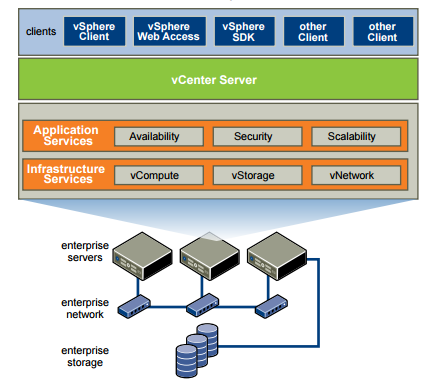 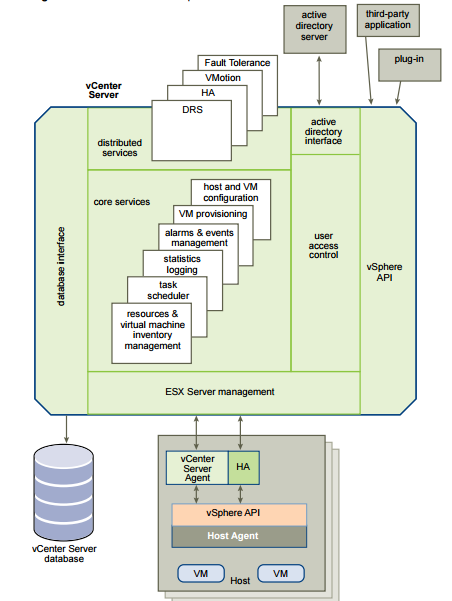 The User Access Control component allows the system administrator to create and manage different levels of access to vCenter Server for different classes of users. For example, a user class might manage and configure the physical virtualization server hardware in the datacenter. Another user class might only manage virtual resources within a particular resource pool in the virtual machine cluster.

Interfaces with the vCenter Server agent to manage each physical server in the datacenter.

The VMware vSphere storage architecture consists of layers of abstraction that hide and manage the complexity and differences among physical storage subsystems. 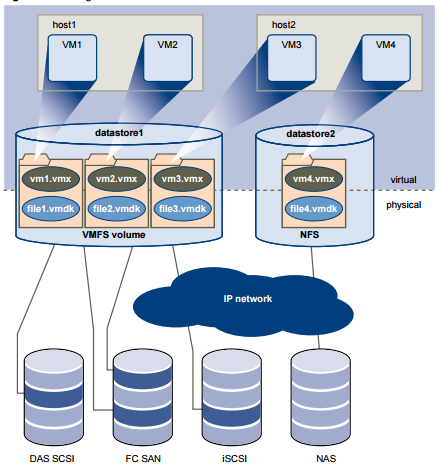 The virtual SCSI disks are provisioned from datastore elements in the datacenter. A datastore is like a storage appliance that delivers storage space for virtual machines across multiple physical hosts. The datastore abstraction is a model that assigns storage space to virtual machines while insulating the guest from the complexity of the underlying physical storage technology. The guest virtual machine is not exposed to Fibre Channel SAN, iSCSI SAN, direct-attached storage, and NAS. Each virtual machine is stored as a set of files in a directory in the datastore. The disk storage associated with each virtual guest is a set of files within the guest's directory. You can operate on the guest disk storage as an ordinary file. It can be copied, moved, or backed up. New virtual disks can be added to a virtual machine without powering it down. In that case, a virtual disk file (.vmdk) is created in VMFS to provide new storage for the added virtual disk or an existing virtual disk file is associated with a virtual machine. Each datastore is a physical VMFS volume on a storage device. NAS datastores are an NFS volume with VMFS characteristics. Datastores can span multiple physical storage subsystems, a single VMFS volume can contain one or more LUNs from a local SCSI disk array on a physical host, a Fibre Channel SAN disk farm, or iSCSI SAN disk farm. New LUNs added to any of the physical storage subsystems are detected and made available to all existing or new datastores. Storage capacity on a previously created datastore can be extended without powering down physical hosts or storage subsystems. If any of the LUNs within a VMFS volume fails or becomes unavailable, only virtual machines that touch that LUN are affected. An exception is the LUN that has the first extent of the spanned volume. All other virtual machines with virtual disks residing in other LUNs continue to function as normal.

VMFS also supports raw device mapping (RDM). RDM provides a mechanism for a virtual machine to have direct access to a LUN on the physical storage subsystem (Fibre Channel or iSCSI only). RDM is useful for supporting two typical types of applications: 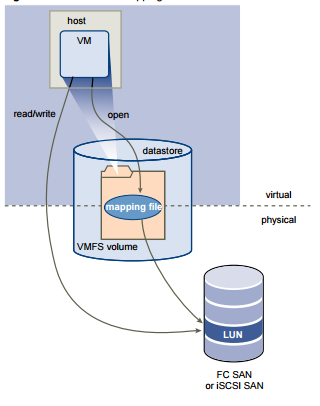 Consolidated Backup works in conjunction with a third-party backup agent residing on a separate backup proxy server (not on the server running ESX/ESXi) but does not require an agent inside the virtual machines. 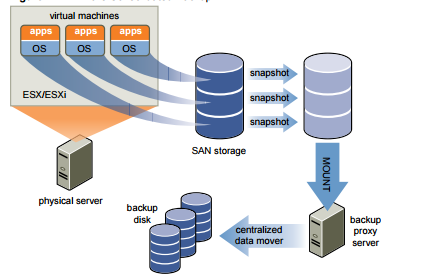