VMware NSX is the network virtualization and security platform that emerged from VMware. It is a platform for the software-defined data center. This software networking platform allows complex networking topologies to be deployed programmatically in seconds. SDNs allow ease of deployment, management, and automation in deploying and maintaining new networks while reducing and in some cases completely eliminating the need to deploy traditional networks.

These core tutorials will help you to learn the fundamentals of VMware NSX. For an in-depth understanding and practical experience,  explore Online "VMware NSX Training"

A VMware NSX setup consists of various components. Each of them has a specific role in the overall setup. Some components are deployed in form of an appliance, others are installed as a module into the Hypervisor: NSX Controller The NSX Controllers implements a network control plane for controlling the Open vSwitch (OVS) devices that perform packet forwarding. Controller Cluster nodes cooperate to manage all OVS devices and enforce consistency between the logical network view (defined via the NSX API) and the transport network view (implemented by OVS-enabled access switches). Transport Nodes Hypervisors, NSX Service Nodes, and NSX Gateways are represented in NSX as transport nodes. A transport node is an any physical or virtual device that runs Open vSwitch and is managed by the NSX Controller to implement logical networks. How the NSX Controller manages the transport node depends on the role of that transport node:

NSX Manager The NSX Manager provides a GUI for operators to set up and configure an NSX network. It is not used by OpenStack itself and could be removed in the case that the operator uses CLI commands for all setup and configuration steps. 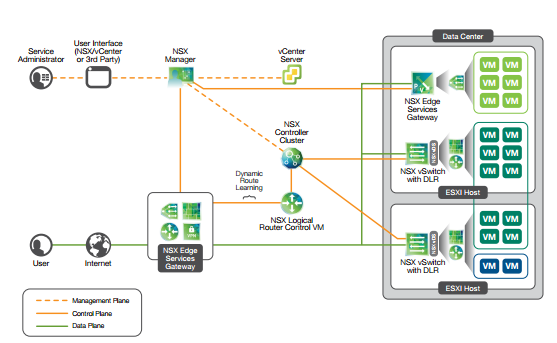 In this diagram, the service administrator can provide the entire lifecycle of either a network segment (VLAN or VXLAN) or network service (firewall, load balancing, VPN, etc.) using either a third-party management interface or through the vCenter Web Client. Any programmatic changes made by the service administrator to firewalls, networks, or routing are sent from the NSX Manager to either the NSX Edge Services Gateway (NSX Edge) or the NSX vSwitches through the NSX Controller. NSX vSwitches provide efficient, in-hypervisor networking capabilities that allow for an optimized network path and enhanced security for “east-west” traffic, which uses logical network resources. The NSX vSwitch can perform distributed routing for VLAN and VXLAN-connected networks, firewall services at the vNIC level, and typical layer 2 switching services. The NSX vSwitch firewall capabilities control the ingress and egress of network traffic for each VM using traditional network configurations (IP address, IP port, etc.), by vCenter object type, or by the user’s identity. The NSX Edge Services Gateway on the internal network provides load balancing services to applications housed within the data center. The externally facing NSX Edge VM handles the “north-south” network traffic by providing routing, firewall, and VPN services to users wishing to access resources within the secure network boundary. Additionally, the NSX Edge is controlling access to external network ports and protocols for systems that sit within the secure network boundary.

This section discusses how network virtualization offered by VMware NSX-v can be placed on top of the scalable L3 network fabric presented in the previous sections. Network virtualization consists of three major aspects: decouple, reproduce, and automate. All three aspects are vital in achieving the desired efficiencies. This section focuses on decoupling, which is key to simplifying and scaling the physical infrastructure. Being able to provide L2 connectivity at the logical network level, independently from the characteristics of the underlying network infrastructure is the fundamental property that enables the decoupling effect. In the example of an L3 DC fabric where the L2/L3 boundary is positioned at the leaf layer, VLANs cannot span beyond a single rack inside the switching infrastructure but this does not prevent the provisioning of L2 adjacency between workloads connected to the logical networks. When building a new environment, it is essential to choose an architecture that allows for future growth. The approach discussed here works for deployments that begin small but grow to large-scale ones while keeping the same overall architecture. The guiding principle for such deployments is that the network virtualization solution does not imply any spanning of VLANs beyond a single rack. Although this appears to be a simple requirement, it has a widespread impact on how a physical switching infrastructure can be built and on how it scales. In an NSX enabled data center it is desirable to achieve logical separation and grouping of the ESXi hosts providing specific functions such as compute, management, and edge services. This separation is logically arranged and provides the following advantages to the DC architect:

-Flexibility of expanding and contracting resources for specific functions.

-Ability to isolate and develop a span of control.

The primary responsibility of traditional and virtualized networking devices is to move and manage traffic across the network. It is important to understand how these network devices are programmed, the protocols and standards used to learn about network paths and other types of devices, and the way network traffic rules are enforced when processing network traffic. You’ll commonly hear about the three logical levels of network device functionality—the data plane, control plane, and management plane. The following diagram describes each network plane and its primary purpose.

After the BIG-IQ Cloud is installed, the next step to completing the integration is to set up the NSX connector. The NSX connector establishes a connection between vCenter, NSX Manager, and BIG-IQ Cloud. Once this connection is established, BIG-IQ Cloud has the means to communicate with the NSX Manager and vCenter server to deploy and manage BIG-IP VEs and application delivery services. BIG-IP administrators can configure the available BIG-IP VE server images and assign a BIG-IP licensing pool used by a specific VMware NSX Manager. The NSX Connector can also be associated with the BIG-IQ Cloud catalog items to present specific application delivery configurations to NSX Manager. The BIG-IP VE images are stored on an internal web server or datastore for quick and easy access.

VMware NSX-v network virtualization solution addresses current challenges with physical network infrastructure and brings flexibility, agility, and scale through VXLAN-based logical networks. Along with the ability to create on-demand logical networks using VXLAN, the NSX Edge Services Gateway helps users deploy various logical network services such as firewalls, DHCP, NAT, and load balancing on these networks. This is possible due to its ability to decouple the virtual network from the physical network and then reproduce the properties and services in the virtual environment. NSX-v reproduces in the logical space typical network services traditionally delivered by the physical infrastructure, as switching, routing, security, load-balancing, Virtual Private Networking and allows to extend connectivity into the logical space to physical devices connected to the external network.