JBoss Application Server is assembled from a set of independent, yet cooperating components and services that are neatly packaged and fully hot-deployable. It is architected to be seamlessly embeddable in applications, and the nature of its embedding is completely customizable to the requirements of the application itself. Only the critical and necessary application server components, therefore, need to be brought along as part of the application’s baseline footprint. Developers can also easily create and add their services to the system, thus ensuring that customs services exhibit the same consistent behavior as the JBoss standard set of services."

Inclined to build a profession as JBOSS? Then here is the blog post on, explore "JBoss Training" 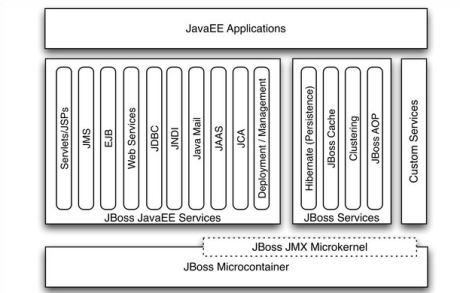 JBoss Microcontainer is an inversion of control (IoC) framework. IoC frameworks let you create, configure, and wire up simple Java objects (POJOs). Classes don’t need special coding to be usable. The objects created usually represent the modules of your application.

Increase the modularity of an application by allowing the separation of cross-cutting concerns (e.g. logging is often required in many parts of your application).