1. It can help speed up recovery if there is a disk failure because journaling file systems keep a “journal” of the file system’s metadata

2. It can check drivers faster during the system boot process.

-> There are many types of file systems

ISO 9660: The standard file system for CD-ROMs. It is also known as the high sierra file system, or HSFS, on the Unix systems.

ReiserFS: The ReiserFS file system is resizable and supports fast journaling It’s more efficient when most of the files are very small and very large. It’s based on the concept of “balanced trees”. It is no longer supported by RHEL, or even by its format main proponent, SUSE.

Xfs: Developed by silicon Graphics as a journaling file system, it supports very large files: as of this writing, xfs files are limited to 9x1018 bytes. Do not confuse this file system with the x font server, both use the same acronym.

m  -->    specifies a reserved percentage of blocks on a file system.

-Backup any existing data on the partition

Mkfs.msdos (or) mkfs.vfat (or) mkdosfs   ----> Formats a partition to the Microsoft compatible VFAT file system: it does not create bootable file systems.

mkfs.xfs            Formats a volume to the xfs file system developed by the former silicon graphics.

You can use the dd command to reserve space for another swap on the /dev/sda9 partition.

Step 2: àJust as with partition swaps, you can now create a swap space specifying the device file just created

Step 4: à Again you can verify that the swap is enabled

Note: The big difference between the two swap types is that file swap is easier to manage because you can just move the swap file to another disk if you want. The swap partition would need to be removed re-created, and so on. Although Red Hat recommends using a partition swap, file swaps are fast enough these days with less administrative overhead to not use them instead. One word of caution, though, is that you can use only one swap (of either type) per physical disk.

Step 1):  ---->start by going to the /opt directory, where you can make some directories to serve as a mount point.

Step 4): àYou can use the “Fuser and lsof” commands to check for open files and users that are currently using files on a file system

Now you know how to mount and unmount file systems, but there is something else you need to look at. If you reboot your system right now, all the file systems that you just mounted will no longer be available when the system comes back up. Why? The mount command is not persistent, so anything that is mounted with it will no longer be available across system reboots. I suppose you want to know how to fix that, right the system looks at two config files

Every time you mount or unmount a file system, this file is updated to always reflect what is currently mounted on the system

Label: Labels enable you to determine a specific file system more easily with a common name, instead of /dev/sda6. An added benefit is the system’s being able to keep its label even if the underlying disk is switched with a new one.

àYou can also query more information about the device using the blkid command.

Step 5: ----> Combine the blkid cmd with grep for specific results

Step 6: ----> When you finish your maintenance, you can remount the file system with the new Label instead of the device path:

---->You could even update the /etc/fstab file to use the label information instead of the device path.

---->you can use the mount command to verify the label names

---->you also can use the df command to view the usage information for your file systems,

Step 1: To install the quota package

Step 2: Verify that the package was installed successfully

Step 3: you can query quota support from the kernel with the following command

Inclined to build a profession as Linux Developer? Then here is the blog post on, explore Linux Training

Step 2: you can accomplish this by using the mount command:

Step 3: You can verify that the mount and quota options took correctly

There are two files that maintain quotas for users and groups.

Step 4: to start the quota system, you use the quotacheck cmd.

Step 5: Run the cmd manually the first time just to make sure that quotas turned on:

Hard limit: Required only when a grace period exists for soft limits. If the hard limit does exist, it is the maximum limit that you can hit before your grace period expires on the soft limit.

Step 6: Set the limits for user 1 by using the edquota cmd.

Step 7: Again, you use the eduquota cmd, but with a different option:

Tip: The edquota cmd offers a pretty cool feature. After you configure a quota and your limits for a single user, you can actually copy this over to other users as if it were a template. To do this, specify the user you want to use as a template first and call the eduquota cmd with the –p option. # edquota –up user1 user2 user3

Step3: Before you can even use ACL’s however, you need to make sure that the file system has been mounted with ACL parameter:

Step4: You can accomplish this using the following

Step5: If your file system isn’t already mounted, you could also use the following.

Step6: To verify, you can use the previous cmd:

Step 8:  To make the changes take effect, you need to remount the file system

Now verify that your file system has the ACL options:

Getfacl obtains the ACL from a file or directory

Setfacl   sets or modifies an ACL

To check the ACL permissions again:

Verify the ACL has been removed:

File permissions and ACL’s can get really complex if they aren’t throught out ahead of time.

Step4: If you have multiple ACL set up on a single file, you can remove them all with the - -b option instead of removing them one by one: 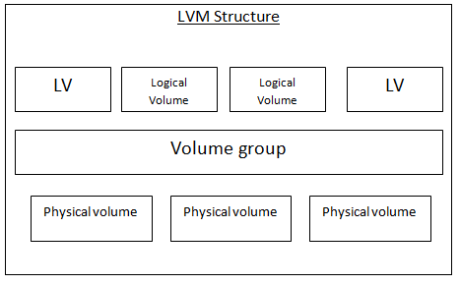 Step 2: Verify that it is installed

----> To update to kernel for rereading #partprobe /dev/sad

Step5: To create a volume group:

----> Verify that the volume group was created successfully:

----> when volume groups are created and initialized, the physical volumes are broken down into physical extends (the unit of measurement for LVM). This is significant because you can adjust the size of how data is stored based on the size of each physical extend, defined when the volume group is created (the default is 4MB).

---->To create one more logical volume

---->Verify with the following cmd

Adjusting the size of LVM partitions:

---->verify the change with the following cmd:

Step 2: To decrease a logical volume

Step 3:   ---->Suppose, though, that you want to add a new physical volume so that you can extend your volume group.

---->Now verify the details of the newly increase vg:

Step 4: To reduce the volume group to no longer include the physical volume /dev/ sda15, you can use the vgreduce cmd:

Suppose you have a drive that is old or dying and you’d like to remove it from the system. On a system with normal partitions, you would have to copy all the data from one disk to another while the disk is offline (because of file locks). Having LVM makes this easier because you can migrate your data from one disk to another, even while the disk is online! This capability is very useful when you need to replace a disk

Step 1: To create the physical volume

Step 4: Verify all logical volumes are in place

Step 5: Migrate the data from the “dying” drive

Note: Make sure that you have more than one physical volume; otherwise there will be nowhere for the data to move.

It was just as important to understand how to delete LVM partitions as it to create them. This is a common task when you are upgrading or redesigning a file system layout.

Step 1: To remove a logical volume

---->Although this advice should common sense, make sure you back up any data before deleting anything within the LVM structure.

àNow you can extend the file system

Step 3:   àNow that your maintenance is complete, remount the file system;

àyou can use the mount cmd to verify it mounted successfully:

àNow you can use the df cmd to view the usage information for your file systems. This should also reflect the additional space that you just added to the /mnt file system.

RAID: Now let’s move on to the final type of advanced partitioning: RAID

---->RAID partitions allow for more advanced features such as redundancy and better performance.

---->Mainly we implement the Raid in order to increase the storage capacity along with data security.

---->While RAID can be implemented at the hardware level, the Red Hat exams are not hardware-based and therefore focus on the software implementation of RAID through the MD driver.

---->Before we describe how to implement RAID, let’s look at the different types of RAID.

RAID 0: (Striping)              Disks are grouped together to form one large drive. This offers better performance at the cost of availability. Should any single disk in the RAID fail, the entire set of disks becomes unusable.

RAID 1: (Mirroring)           Disks are copied from one to another, allowing for redundancy. Should one disk fail, the other disk takes over, having an exact copy of data from the original disk

RAID5:  (Striping with parity) Disks are similar to RAID 0 and are joined together to form one large drive. The difference here is that 25% of the disk is used for a parity bit, which allows the disks to be recovered should a single disk failure.

---->To start, you first need to create partitions on the disk you want to use. You start with a RAID 5 setup, so you need to make partitions on at least three different disks.

Step 2: Again to verify that the RAID array has been created successfully

Step 3: View the status of the newly created RAID array:

This output shows that you have an active RAID 5 array with three disks. The last few lines here show the state of each disk and partition in the RAID array. You can also see that the RAID is in “Recovery” mode, or creating itself.

Step 4: If you wait the estimated 2.9 minutes and then query again, you see the following

What to Do when a disk fails:

Suppose that a disk in the array failed. In that case, you need to remove that disk from the array and replace it with a working one.

Step 1:  manually fail a disk in the array,

Step 2: verify that the disk in the array has failed

Step 3: To remove a disk from the array

Step 4: Look at the last few lines of the RAID details again

---->If you want, you could combine the previous two commands

Step 5: When the disk is partitioned, you can add it back to the array

---->Verify that it has been added properly #mdadm –D /dev/mdo

Step 7: Should something go seriously wrong and you need to take the RAID array offline completely

Step1: To delete an array, first stop it