The solution from Microsoft: .Net

It is a platform or collection of much small technology integrated as a single large technology for developing powerful applications that can be used anywhere anytime.

All the languages are equally powerful such that any language can be selected for developing any type of application.

.NET Technology has been introduced with rich Base class Library (BCL) and common type system (CTS) using which language Independence is achieved.

Whenever the code written in one language can be used from the application developed using other languages then it is said to be Language Interoperability.

These core tutorials will help you to learn the fundamentals of .NET. For an in-depth understanding and practical experience, explore Online ".NET Training"

The compiled source code of the .NET application developed using any language will be in the format of MSIL instructions and hence the code written in one language can be used from other language applications targeting .NET

Whenever an application developed for one platform (Ex: windows) if that application can be executed from other platforms like UNIX, LINUX, Mac, OS2 etc without any compilations, modifications then it is said to be supporting platform Independency. 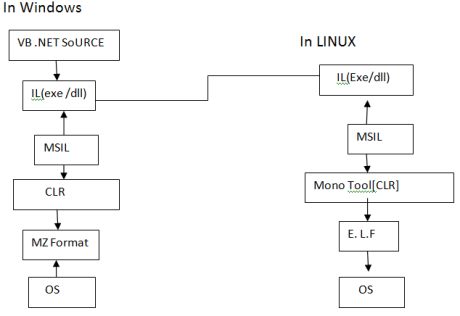 Whenever an application developed for one device if it can be executed from other devices without any modifications or recompilations then it is said to devise independence.

For the desktop or standalone application: