Welcome to the SPSS Tutorials. The intent of these tutorials is to provide an in-depth understanding of SPSS. In addition to free SPSS Tutorials, you can find interview questions, how-to tutorials and issues, and their resolutions.

SPSS is software for editing and analyzing data. These data may come from basically any imaginable source: a customer database, scientific research, or even the server log files of a website. SPSS can open all file formats that are commonly used for structured data such as Excel, plain text files, and relational (SQL) databases. SPSS for Windows has the same general look a feel of most other programs for Windows. Virtually anything statistic that you wish to perform can be accomplished in combination with pointing and clicking on the menus and various interactive dialog boxes. You may have noted that the examples in the Howell textbook are performed/analyzed via code. That is, SPSS, like many other packages, can be accessed by programming short scripts, instead of pointing and clicking. We will not cover any programming in this tutorial. Presumably, SPSS is already installed on your computer. If you don't have a shortcut on your desktop go to the [Start => Programs] menu and start the package by clicking on the SPSS icon. Before proceeding I should say a few words about a very simple convention that will be used in this tutorial. In this point and click environment one often has to navigate through many layers of menu items before encountering the required option. In the above paragraph, the prescribed task was to locate the SPSS icon in the [Start] menu structure. To get to that icon, one must first click on [Start] then move the pointer to the [Programs] options, before locating the SPSS icon. This sequence of events can be conveyed by typing [Start => Programs] .

In the Data View, the data are laid out in the standard rectangular format for statistical software. Each row represents a unit of observation, sometimes also referred to as a “record” or in SPSS as a “case.” The case (observation) number in the leftmost column is assigned automatically and is not saved as data. Each column represents a variable. All of the data in a column must be of the same “type,” either numeric or string (also called “character”). Each data cell holds a data value. If data are missing, they are displayed as a period (“.”) or as a blank (“ “). Data values may be displayed as either the actual value or as a “formatted” value. For example, a data value about a person’s income might be 15000, while its formatted value might be shown as “$15,000.” Formats can also take the form of value labels, for instance, data recorded as 1’s and 2’s might be labeled as “Male” and “Female.” While formatting makes it easier to interpret results, it is important to remember that the data values are what SPSS actually processes. In particular, when you set up a command that requires you to specify one or more data values, you use values and not formatted values.

Before you enter your data, you will want to define your variables. You need to give each variable a label (up to 8 characters in length), provide a longer descriptive label, provide information about missing values for that variable, and value labels if it is a nominal variable. At the bottom left of the screen, you will see two tabs: one is called, "Data View" and the other is called "Variable View." The variable view should be in white. If not, click on it. Across the top line, the column headings should read Name, Type, Width, etc.

To define a variable, from the Spss Data Editor window:
-For example, if your variable is sex, it has two categories, male and female. You can assign numeric values to male and female, e.g., male=1, female=2.
-To do this, click on the grey box on the right-hand side of the box and a Value Labels dialogue box will appear. 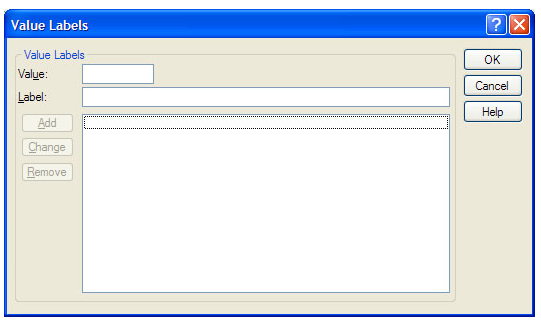 -Click in the box labeled “Value Label” and type in “Male”

-Click on the box labeled “Value label” and type in “Female” 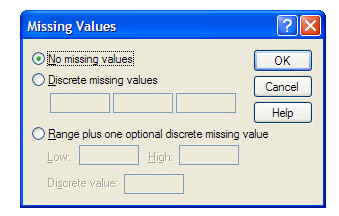 To recode a variable (e.g., you have an item coded on a Likert Scale from 1=Strongly Disagree to 5=Strongly Agree and you want to recode the item so the scale runs from 1=Strongly Agree to 5=Strongly Disagree): From the Data Editor Window
-Click on "Transform"
-Click on "Recode into Different Variables..."
Note: There is a danger to choosing the other option, "Recode Into Same Variables...". SPSS will change the values of your original variable. If you make a mistake, it is difficult to undo the change and make the necessary correction to the original data. 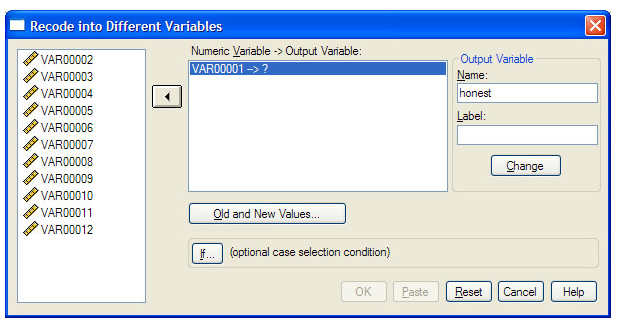 To compute a new variable from existing ones (e.g. to create a self-esteem scale that is the mean of 8 self-esteem items), SPSS allows you to create a new variable based on a mathematical formula involving your original variables. From the Data Editor Window
Click on “Transform”
You will be presented with a dialog box listing the variables in your data set in the column on the left. 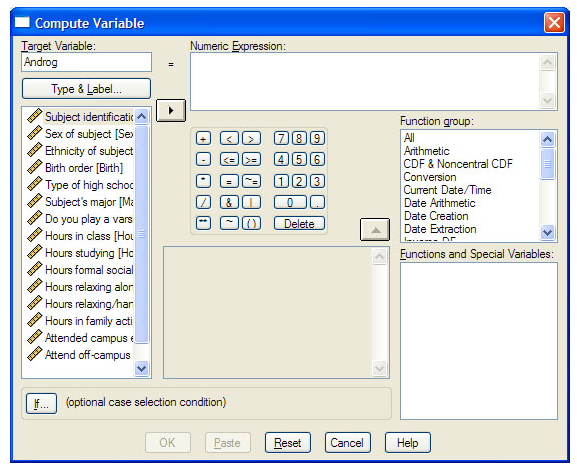 In the box labeled, “Target Variable” give a name to the new variable you want to create. In the box labeled, “Numeric Expression” type 1 and Click “If...” This will enable you to define your first group. The following Compute Variable: If the Cases dialog box will appear:

Click “Include if case satisfies the condition:” In the box to the right, type a description of your first group. In the above example, the first group (Masculine) is made up of subjects with scores above the median=28 on Masculinity, and scores at or below the median=26 on Femininity. Click “Continue” Click on “OK” You will be back to the Compute Variable dialog box. Click on “OK” A dialogue box asking whether you want to change the variable or not will appear. Click on "OK" REPEAT. You now have to repeat this entire procedure beginning with Click on “Transform” Click on “Compute” In the numeric expression box the second time you type “2” and click on “If” Type the description of your second group, Click on “Continue”, and when you return to the Compute Variable dialog box, click “OK”. REPEAT the entire procedure again for the remaining two groups. After you have completed this procedure, you will see that the new variable you have just created appears at the end of your list of variables. You should now assign value labels for your new variable so that you will remember how you defined each group. Click on the new variable. Directions for how to assign value labels can be found under instructions for Defining Variables.

-Opening data files, either in SPSS’ own file format or many others; -Editing data such as computing sums and means over columns or rows of data; -Creating tables and charts containing frequency counts or summary statistics over (groups of) cases; -Running inferential statistics such as ANOVA, regression and factor analysis; -Saving data and output in a wide variety of file formats.