In general, Qlikview consumes more memory while reloading and while opening the qlikview file. This can be rectified by saving the file with lower compression.

If a Qlikview application is large, obviously it will consume more memory while opening the application. Splitting a single large qlikview document into several separate documents will help in solving the issue.

Load Balancer: Server load will be very high if concurrent users using Qlikview web server is high. It can be overcome by using network load balancer(Servers with Windows Advanced Server, IIS, And QlikWebServer)

In data modeling, synthetic keys might form if there two or more tables have common columns exist. Synthetic keys will greatly impact the performance, and it is better to avoid or to remove it. This can be done by removing the unnecessary links and join the tables explicitly in the script.

In some cases, reloading qlikview might take a long time to load. The best practice to overcome is using a Binary Load of static historical data.

Complex calculation within a dimension or expression or in any of the Qlikview objects will give poor performance, and it will be better to use the complex calculations within the script of the QVW.

Avoiding resource heavy expressions or calculations greatly hinder the performance of the qlikview application. Replacing with simpler calculations will help and it's a good practice too in scripting.

Instead of the above expression, replace the count() with sum() and the distinct qualifier by assigning the value ‘1’ to each distinct occurrence as it is read in the script.

Use of Auto number Function:

Avoid using Complex composite keys(when to remove synthetic keys), and instead, use the autonumber() function to generate a sequence which uses compact memory.

Use Star schema instead of snow flake schema.

Memory utilized by the qlikview objects and the calculation time can be monitored from the document properties. This will help to identify which object is consuming more memory and finding the reason for the delay in loading time of the Qlikview application.

Minimized chart objects will consume less memory comparing to the maximized one, hence use of autominimize option will be a good practice in this case.

If the chart is too large, then implementing forced selection by the user will minimize the chart calculation time.

Showing frequencies in listbox can be avoided if not necessary.

During sorting, it is recommended to sort numerical fields numerically than alphabetically.

Use Set Analysis instead of ‘If’ statements.

-Rename the fields in load script 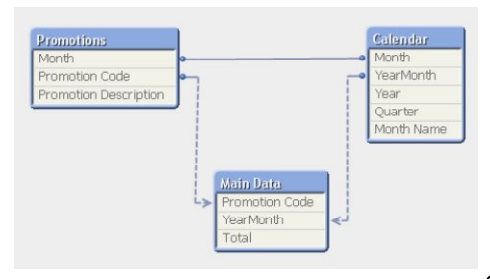 -Errormode = 0 - Will ignore all script errors and continue refreshing application

-ErrorMode = 2 - Will stop execution where there is an error in table load and shows as execution completed. Once click on close we will get a popup saying "script execution failed".

-Returns the error code of the last executed script statement

-This will be reset to 0 after each successfully executed script statement.

-If an error occurs, it will be set to an internal QlikView error code. Error codes are dual values with a numeric and a text component.

Below are the different error codes

-Returns the total number of statements that have caused errors during the current script execution.

-This variable is always reset to 0 at the start of script execution.