The database that contains the rules — all the instances of concrete classes derived from the Rule- base class — is known as the PegaRULES database. This database is also sometimes identified as the rulebase, but it contains more than rules.

In contrast to the persistent instances of rules and other objects in the PegaRULES database, instances on a user clipboard are temporary. When a user logs off, the system deletes the user's clipboard.

Through the database table and database data instances, Process Commander developers working with database administrators determine which classes of objects are stored into which database tables.

Although the PegaRULES database is sometimes called a rulebase, don't confuse the word rulebase — a physical collection of rules and other objects in a relational database — with the Rule- base class, an abstract class that has no instances. 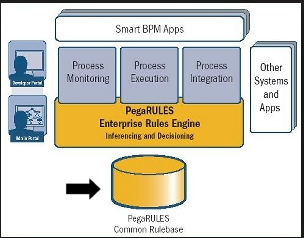 Working with the PegaRULES database:

-The PegaRULES database, as initially installed, consists of about 100 tables that hold all the rules, data instances, work items, history, and other concrete objects from internal classes of your Process Commander system. Views, indexes and stored procedures support performance and other processing requirements.

-By definition, external classes correspond to tables in other databases. These tables are not part of the PegaRULES database.

-A database administrator can modify and evolve the PegaRULES database to meet policy, security, performance, and reporting requirements.

-When initially installed, V6.2SP2 contains around 100 database table (Data-Admin-DB-Table) data instances, linked to about 105 database tables and 7 views in the PegaRULES database.

-This table lists the PegaRULES database tables and an example of a concrete class that maps to that table. No classes are initially mapped to the pr_other table, the default catch-all table for instances of classes not explicitly mapped.

Process Commander adds a line to the alert log when the PegaRULES database takes an unusually long time to respond to a request from the server. The message has one of these formats, with additional details about the date, time, and requestor:

For your own requestor session, a count of database requests that take longer than a fixed threshold value appears in the Requestor Summary section of the Details display of the Performance tool,

By default, the threshold value is set to 500 milliseconds. Through an entry in the prconfig.xml file or Dynamic System Setting, you can choose a larger or smaller threshold, or disable this feature.

In a development environment, such monitoring allows you to identify and isolate those database requests that are complex or place heavy demands on the database. Such requests may affect overall system response and may indicate areas of the database or of the application that need attention.

A PEGA0005 alert may arise from various sources, such as the list view reports, summary view reports, and the RDB-Browse method operating on an external database.