How To Create RuleSet in Pega

What is Ruleset in Pega?

-Access control -Grouping of interrelated rules -Manage Rules -Move applications – sets of rules – from a system process to another commander.

As a container for components of your application, a RuleSet stores a related group of business rules. It’s what you deploy in your production environment or ship to a customer. RuleSets provide security, version control, and the ability to deploy your application in (or move it to) a different Process Commander environment. You must create a RuleSet before you can build an application.

-Rule-RuleSet-Name – Which defines the RuleSet name and other characteristics

It should contain Maximum 64 characters

-Rule-RuleSet-Version – which defines the RuleSet Version.

It has 3 parts separated by a hyphen – Major, Minor & Patch

When you create a new RuleSet, you can choose to specify an existing RuleSet as its parent or Prerequisite. This designation establishes a rule resolution relationship between it and your RuleSet, which can then inherit and extend existing features and characteristics.In most cases, you should specify Pega-ProCom as a prerequisite for new RuleSets. This Process Commander RuleSet contains the standard work management capabilities that you use as building blocks for your applications.

On Selecting Rule Set Version, a new Pop-Up will be opened as follows.

Select the Rule Set name created, in RuleSet Name field and provide a version number in the format xx-yy-zz and click on Create.

In the above expression, xx-yy-zz represents

A new Rule Set Version will be created like this, 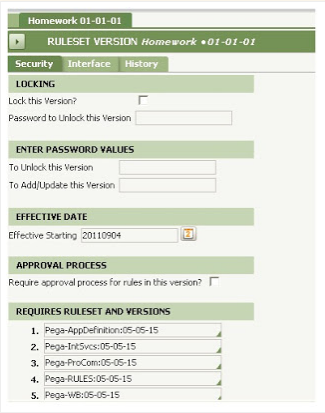 Create a RuleSet to identify, store, and manage the set of rules that define an application or a major portion of an application. You may need five to eight RuleSets per application. Typically, these are created as you use the Application Accelerator; you do not need to create them with the RuleSet form.

How you use RuleSets in your application has important design and deployment consequences. For large and complex applications, several RuleSet may be appropriate. Before you create a RuleSet, think carefully about the purpose, use, and dependencies of current RuleSets and the new RuleSet.

Use the Rules Explorer to list all RuleSet rules in your system.

As a best practice, create the initial set of RuleSets you need using a wizard, such as the Application Accelerator. When you create a new RuleSet, an initial RuleSet version 01-01-01 is also created.

After you create a RuleSet and version, enable developers to create and modify rules in the new RuleSet by referencing the new RuleSet version in an application rule and an access group that is available to yourself or other users.

These RuleSets provide facilities that are part of base PRPC and are typically available to all users. The correct order and versions of these RuleSets are defined by the application rule named PegaRULES:06-03. The descriptions below provide only a general indication of the scope of the features provided.