Welcome to the Drools Tutorials, Drools is a business logic integration platform written in Java. Apart from the tutorials, we will also cover Interview Questions, Issues and How To’s of Docker.

Drools is a Business Logic integration Platform (BLiP). It is written in Java. It is an open source project that is backed by JBoss and Red Hat, Inc. It extends and implements the Rete Pattern matching algorithm.

In layman’s terms, Drools is a collection of tools that allow us to separate and reason over logic and data found within business processes. The two important keywords we need to notice are Logic and Data.

Drools is split into two main parts: Authoring and Runtime.

-Runtime: It involves the creation of working memory and handling the activation.

The Authoring process involves the creation Rules files (.DRL) which contain the rules which are fed into a parser. The parser checks for correctly syntax of the rules and produces an intermediate structure that "describes" the rules. This is then passed to the Package Builder which produces Packagesand undertakes any code generation and compilation that is necessary for the creation of the Package.

Drools Runtime is required to instruct the editor to run the program with specific version of Drools jar. You can run your program/application with different Drools Runtime.

The Working memory is a key point of the Drools engine: it's here that Facts are inserted.

Facts are plain Java classes which rely on the Java Bean pattern( your Java beans from your application). Facts are asserted into the Working Memory where they may then be modified or retracted.

When facts are asserted into the working memory, it will result in one or more rules being concurrently true and scheduled for execution by the Agenda - we start with a fact, it propagates and we end in a conclusion. This method of execution for a Production Rule Systems is called Forward Chaining.

What is a Rule Engine?

Drools is Rule Engine or a Production Rule System that uses the rule-based approach to implement and Expert System. Expert Systems are knowledge-based systems that use knowledge representation to process acquired knowledge into a knowledge base that can be used for reasoning. 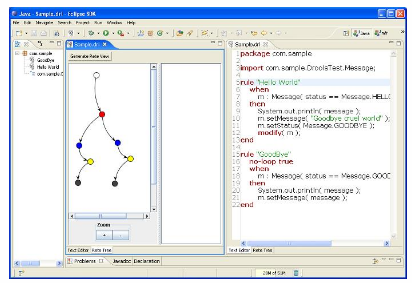 The aim of the new project wizard is to set up an executable sample project to start using rules immediately. This will set up a basic structure, the classpath, sample rules and a test case to get you started. Supports selecting a Drools runtime for the Drools core dependencies. 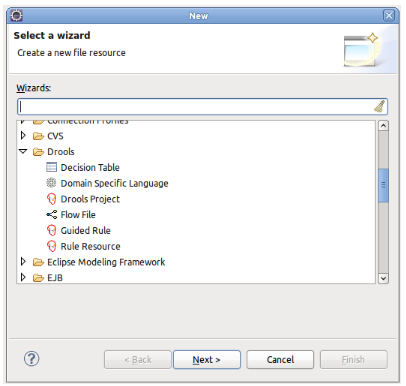 Debugging support to look at the current state of your session, including the data inserted in the working memory, the rules activated, etc. Supports breakpoints in the rules. 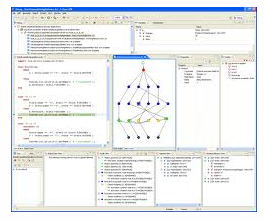 Integrate with the rules repository (as part of Guvnor, also known as the Kie Workbench or business central) using Git tooling.

The heart of the Rules Engine where you specify conditions (if ‘a’ then ‘b’).

Facts are the data on which the rules will act upon. From Java perspective, Facts are the POJO (Plain Old Java Object).

For the rules engine to work, Facts are inserted into the session and when a condition is met, the subsequent rule gets fired. A Session is of two types:

It’s a logical concept. The agenda is the logical place where activations are waiting to be fired.

The rules like “Low Credit Score Rejection” rule are contained in DRL files (files with the extension .drl) that comply with Drools native rule language syntax. To use the created rules in a Java application you must:

-Knowledge Session: The knowledge session is the object used to interact with the rule engine. It is throught a session that you will make the rule engine aware of the facts (the data) that the rule engine will evaluate against the available rules. Inside the Rule Engine

Inside the rule engine, after you have inserted your facts into a knowledge session and invoked the session fireAllRules() method:

-The first Rule in the agenda is the executed, possibly triggering steps 1 and 2 again

This loop is how a Rule Engine infers knowledge from existing facts using rules. You can see that a Rule Engine using pattern matching to reduce/transform the problem space to arrive at a set of facts that can be considered a solution to the problem at hand.

One of the big decisions you’ll face with implementing a rule-based system with Drools is how much Java to put in your rules. As with any other object-oriented application we want encapsulate complex behavior to make our rules more readable. There are also things that are much easily accomplished, tested and developed outside of the realm of the rules engine.

To deal with the interaction with Twitter I decided to use Twitter4J (http://yusuke.homeip.net/twitter4j), a Java library to interact with the Twitter API. Using Twitter4J I created a simple collection of static utility methods contained in the class TwitterUtils.java. Some of the available methods are:

Rule engines can provide a Java developer with an environment in which logic and data are clearly separated. In the simple example used in this article it is easy to see how the DRL file becomes you laboratory of centralized knowledge about the problem at hand. Once the plumbing code is in place you can truly concentrate on the “business logic” in atomic, discrete, manageable chunks.

In this article we’ve barely scratched the surface of the capabilities provided by Drools. Drools 5 is a complete offering that includes the rule engine (Drools Expert), a Business Rule Management System (Drools Guvnor), a process/workflow engine (Drools Flow) and an event processing/temporal reasoning engine (Drools Fusion).