An Activity is an application component that provides a screen with which users can interact in order to do something, such as dial the phone, take a photo, send an email, or view a map. Each activity is given a window in which to draw its user interface. The window typically fills the screen, but may be smaller than the screen and float on top of other windows.   An application usually consists of multiple activities that are loosely bound to each other. Typically, one activity in an application is specified as the "main" activity, which is presented to the user when launching the application for the first time. Each activity can then start another activity in order to perform different actions. Each time a new activity starts, the previous activity is stopped, but the system preserves the activity in a stack (the "back stack"). When a new activity starts, it is pushed onto the back stack and takes user focus. The back stack abides to the basic "last in, first out" queue mechanism, so, when the user is done with the current activity and presses the BACK key, it is popped from the stack (and destroyed) and the previous activity resumes. (The back stack is discussed more in the Tasks and Back Stack document.)   When an activity is stopped because a new activity starts, it is notified of this change in state through the activity's lifecycle callback methods. There are several callback methods that an activity might receive, due to a change in its state—whether the system is creating it, stopping it, resuming it, or destroying it— and each callback provides you the opportunity to perform specific work that's appropriate to that state change. For instance, when stopped, your activity should release any large objects, such as network or database connections. When the activity resumes, you can reacquire the necessary resources and resume actions that were interrupted. These state transitions are all part of the activity lifecycle.   The rest of this document discusses the basics of how to build and use an activity, including a complete discussion of how the activity lifecycle works, so you can properly manage the transition between various activity states. 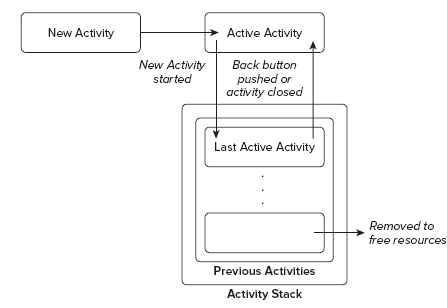 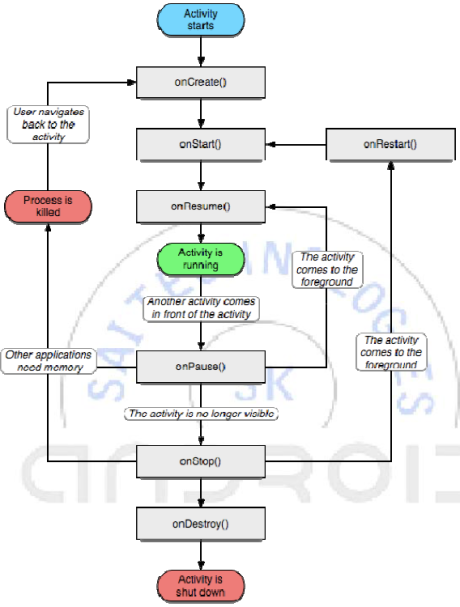 The column labeled "Killable after?" indicates whether or not the system can kill the process hosting the activity at any time after the method returns, without executing another line of the activity's code. Three methods are marked "yes": (onPause(), onStop(), and onDestroy()). Because onPause() is the first of the three, once the activity is created, onPause() is the last method that's guaranteed to be called before the process can be killed—if the system must recover memory in an emergency, then onStop() and onDestroy() might not be called. Therefore, you should use onPause() to write crucial persistent data (such as user edits) to storage. However, you should be selective about what information must be retained during onPause(), because any blocking procedures in this method block the transition to the next activity and slow the user experience. Methods that are marked "No" in the Killable column protect the process hosting the activity from being killed from the moment they are called. Thus, an activity is killable from the time onPause() returns to the time onResume() is called. It will not again be killable until onPause() is again called and returns. Note: An activity that's not technically "killable" by this definition in table 1 might still be killed by the system—but that would happen only in extreme circumstances when there is no other recourse. When an activity might be killed is discussed more in the Processes and Threading document.    Saving activity state The introduction to Managing the Activity Lifecycle briefly mentions that when an activity is paused or stopped, the state of the activity is retained. This is true because the Activity object is still held in memory when it is paused or stopped—all information about its members and current state is still alive. Thus, any changes the user made within the activity are retained in memory, so that when the activity returns to the foreground (when it "resumes"), those changes are still there. 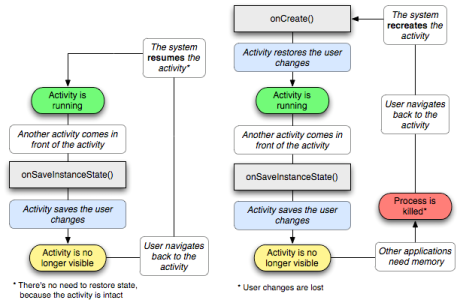