Welcome to the Python Tutorials, Python works much like the two previous categories, PHP and ColdFusion as they are all server side programming languages.

Apart from the tutorials, we will also cover Interview Questions, Issues and How To’s of Python.

Inclined to build a profession as python Developer? Then here is the blog post on, explore Python Training

Python is a high-level, interpreted, interactive and object-oriented scripting language. Python is designed to be highly readable. It uses English keywords frequently where as other languages use punctuation, and it has fewer syntactical constructions than other languages.

Python is Interpreted: Python is processed at runtime by the interpreter. You do not need to compile your program before executing it. This is similar to PERL and PHP.

Python is Interactive: You can actually sit at a Python prompt and interact with the interpreter directly to write your programs.

Python is a Beginner's Language: Python is a great language for the beginner-level programmers and supports the development of a wide range of applications from simple text processing to WWW browsers to games.

Python was developed by Guido van Rossum in the late eighties and early nineties at the National Research Institute for Mathematics and Computer Science in the Netherlands.

Python is derived from many other languages, including ABC, Modula-3, C++, Algol-68, SmallTalk, and Unix shell and other scripting languages.

Python is now maintained by a core development team at the institute, although Guido van Rossum still holds a vital role in directing its progress.

A while loop statement in Python programming language repeatedly executes a target statement as long as a given condition is true.

statement(s) may be a single statement or a block of statements. The Condition may be any expression, and true is any non-zero value. The loop iterates while the condition is true.

In Python, all the statements indented by the same number of character spaces after a programming construct are considered to be part of a single block of code. Python uses indentation as its method of grouping statements. 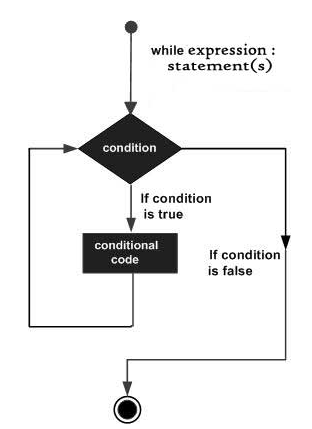 An infinite loop might be useful in client/server programming where the server needs to run continuously so that client programs can communicate with it as and when required.

It has the ability to iterate over the items of any sequence, such as a list or a string. 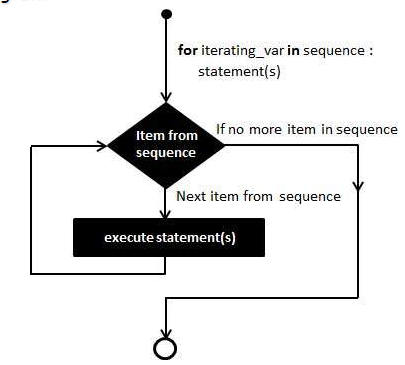 Python programming language allows to use one loop inside another loop. Following section shows few examples to illustrate the concept.

A final note on loop nesting is that you can put any type of loop inside of any other type of loop. For example a for loop can be inside a while loop or vice versa.

The “easy” way to do a thing in Python is usually right for the most common use-case. Python is tight code.

You can become productive in Python fairly quickly even as a beginner, yet it is powerful enough for professionals.

The Python Package Index (PyPI) contains numerous third-party modules that make Python capable of interacting with most of the other languages and platforms.

Python language is developed under an OSI-approved open source license, which makes it free to use and distribute, including for commercial purposes.

Further, its development is driven by the community which collaborates for its code through hosting conferences and mailing lists, and provides for its numerous modules

Python offers excellent readability and uncluttered simple-to-learn syntax which helps beginners to utilize this programming language. The code style guidelines, PEP 8, provide a set of rules to facilitate the formatting of code. Additionally, the wide base of users and active developers has resulted in a rich internet resource bank to encourage development and the continued adoption of the language.

Python has built-in list and dictionary data structures which can be used to construct fast runtime data structures.  Further, Python also provides the option of dynamic high-level data typing which reduces the length of support code that is needed.

Python has clean object-oriented design, provides enhanced process control capabilities, and possesses strong integration and text processing capabilities and its own unit testing framework, all of which contribute to the increase in its speed and productivity. Python is considered a viable option for building complex multi-protocol network applications.

Concurrency and parallelism, although completely possible in Python, are not designed-in for super-elegant use, as with JavaScript and Go.

If you choose JavaScript on the server (and by default on the client), then you only ever need to know one language, and Python feels unnecessary.

If you like meta programming of the sort popular in LISP, then Python’s one-liner anonymous functions called Lambda’s are going to be limiting.