This module allows you to Create, Maintain, Display, and delete personnel information of an employee. Employee data over here is stored in ‘Infotypes’. This module is integrated with all others and modules of SAP-HR.

Different sub modules in SAP-HR will have different starting numbers in the 4 digit number key of the infotype. They are given below:

Maintaining Infotypes: Infotype can be maintained by using the following functions

No History is maintained

No History is maintained.

In this step, you can store parameters in your user master record. You will need these parameters later for the overall management of the country version that you have chosen.

If you want to set up several country versions in the one customizing project at the same time, you cannot re-assign the user parameter to the country grouping. If you have already entered a parameter value, then you must delete this entry.

In this step, you define the number range(s) for personnel number assignment.

You have two basic options:

In this case, the SAP System assigns the personnel numbers.

In this case, the user assigns the personnel numbers.

Define the number intervals for your number ranges.

In this work step you use the feature NUMKR, to determine whether you want to use internal or external number assignment when hiring new employees and if so, you can determine for which HR master records it is to be used

Please refer to the general documentation for feature maintenance in the manual Tools which is located in the R/3 Library under Personnel Administration and Payroll.

Infotype Menus: In this section, you can change the menus for displaying and maintaining infotype data.

The standard SAP system can be implemented without carrying out the steps in this section.

However, perhaps you would like to define menus for certain user groups which would be included in the list of possible menus.

Infotype Menus: In this step, you define the infotype menus for maintaining and displaying Human Resources master data. These menus can be defined so that they are dependent on the user group (user parameter UGR). If there are no entries for an infotype menu for the user's user group or if the user has not maintained his/her user group, then the infotype menu is determined using the reference user group.

Standard Settings: Many infotype menus are set up to be dependent on the user group. The user groups correspond to the country groupings.

The menu AP is predefined for Recruitment.

Choose the menu category "I" and the infotype menu.

Define whether the menu is to be dependent on the user group.

If necessary, assign the system response for the case where the user has not maintained the user group or where there are no entries in the menu.

Assign a reference user group which can be used to set up the menu, if necessary.

Infotypes in the infotype menu 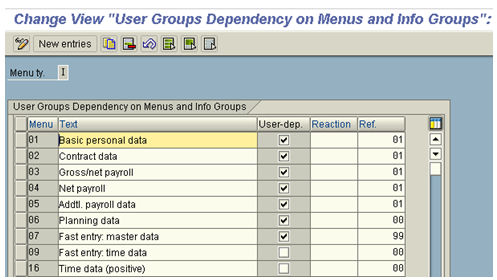 If parameter UGR is not set in the user defaults (transaction USER), enter the reference user group that should be used for the menu layout.

The SPA-GPA parameter UGR must be maintained in the user defaults for this purpose.

In this field you can indicate whether the menu or the info group is user group dependent. 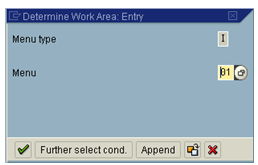 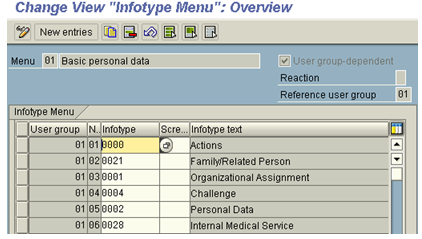 Determine Choice of Infotype Menu: In this step, you define the infotype menu choice which appears in a dialog box when Human Resources master data is maintained and displayed.

Example: You have defined a new infotype menu and want this to appear in the dialog box.

Activities: User group dependency of the choice of infotype menu

a) Choose the menu category "S" and menu "01" for the infotype menu choice.

b) Determine whether the menu is to be dependent on the user group.

c) If necessary, assign the system response for the case where the user has not maintained his/her user group or where no entries exist.

d) Assign a reference user group which can be used to set up the menu if necessary.

a) Choose menu category "S" and menu "01" for the infotype menu choice.

b) Include the infotype menus for the user group. 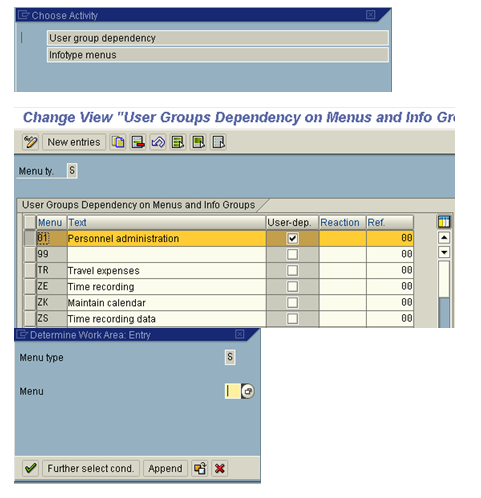 In addition to this, the info group can be set up so that it is dependent on the employee's control data. You can do this by using the feature Info group modifier (IGMOD).

a) Choose menu category G and the info group.

b) Determine whether the info group is to be dependent on the user group.

c) If necessary, assign the system response for the case, where the user has not maintained the user group or where there are no entries in the info group.

a) Maintain the feature IGMOD.

b) Always call up the info group as the first decision rule, otherwise, you will need to make entries for the respective return codes for each info group.

Infotypes of the info group

a) Choose the info group.

b) Assign the operations, infotypes, and info subtypes for the user group and the return value of the feature IGMOD. Read the field documentation for the allowed operations.

Please consider the following when using the operation INS for creating:

When carrying out actions, the system checks to see whether an infotype already exists (possibly with the same subtype) when creating infotypes. In this case, the system switches from "Create" to "Change".

It normally only makes sense to use the operation "Create" (INS) for a hiring action. For all other actions, you should use the function code "Copy" (COP) . When copying, existing records with the start date of the action are proposed. If no records exist for the infotype, the system internally switches to "Create".

In some cases, you need to create a new record. When you run the Birth of a child actor, the infotypes Personal Data (0002), Family/Related Persons (0021), Additional Payments (0015) need to be processed one after the other. You need to create a new record for the infotype "Family/Related Persons" that is independent of the records that already exist. In this instance, choose the operation "Create for actions" (INSS) . The system does not switch to the "Change" operation MOD.

During a leaving action, you use the operation LIS9 for delimiting records.

Note that the infotypes Actions (0000) and Organizational assignment (0001) must never be delimited.

Set up Personnel Actions: You can use personnel actions to carry out complex personnel administration procedures. A personnel action displays, in the correct sequence, the infotypes that have to be maintained for a specific action.

you determine whether you want to use the Additional Actions infotype (0302).

The Additional Actions infotype (0302) enables the automatic logging of all personnel actions types that you carry out for an employee on a key date.

You only have to carry out this activity if you want to use the Additional Actions infotype (0302) and have activated this infotype.

Requirements: Familiarize yourself with the personnel processes that occur in your enterprise, such as entry or leaving.

Recommendation: Refer to the SAP sample entries for guidance when you are defining your own personnel actions.

Delete the entries you do not require.

c) In the FC field, enter the function character for the personnel action type.

You can distinguish the first entry actions from all the others. Choose the function character 1 for first entries, 7 for first entries with data transfer from recruitment and 0 for all other personnel action types.

This status indicator is not used in the standard system. You can use this indicator individually.

g) Decide whether organizational assignment data may be changed whilst personnel actions are being carried out. When you set the indicator P, the position field in the Actions infotype (0000) is ready for entry.

You can process the fields Personnel area, Employee group, and Employee subgroup with the indicators PA, EG, and ES.

h) Assign an infotype group number to the IG field in the personnel action type.

You can then process the individual infotypes from the selected group in the personnel action type in the appropriate sequence.

You defined the infotype groups in the step.

i) Specify whether the data entered on the initial screen of the Actions infotype (0000) is the start date for new infotype records or the end date for old infotype records. This is especially important in the case of leaving actions.

j) Use the indicator U0000 to determine whether your personnel action type should create a new record for the Actions infotype (0000).

k) Use the Country change indicator to determine whether the personnel action type is a country change.

Specify a priority list for the personnel actions which do not change the status, and for which you have set the indicator to U0000.

Do not define any new personnel action types if only the infotype group should be different for the personnel administrator. To achieve this, you can define the info groups as user group dependent.

The keys for personnel action types, which you carry out for an employee, for example, hiring, organizational change, leaving, are stored in the infotype Actions (0000).

When an employee has left, there is also a record in the system for the personnel action Leaving. The most important information in this infotype is the employee's employment status: active, leave of absence, retired, left.

Personnel actions that are only used to process several infotypes in an Infogroup should not be saved in the info type Actions (0000). SAP recommends that you log personnel actions of this kind automatically using the Additional actions infotype (0302).

You probably defined personnel actions in the previous step.

In this step, you can determine the reasons for actions.

You want to be able to evaluate which employees left because they were dissatisfied, in order to be able to increase the satisfaction of your employees.

In this step, you define a menu of actions that appears if the user chooses the function "Personnel actions" in HR master data maintenance. The menu can be defined so that it is dependent on the user group (user parameter "UGR"). If there are no entries in the table for the user's user group, or if the user has not maintained their user group, then a so-called reference user group is determined, which is used to set up the menu.

Requirements: You have already checked the existing personnel actions and, if necessary, create your own actions.

Standard Settings: Action menu "01" is assigned to the function "Personnel actions". The action menu is set up depending on the user group. The values of the user groups correspond to the country groupings.

a) Choose the menu category "M" and menu "01" for the personnel actions.

b) Determine whether the menu is to be dependent on a user group.

c) If necessary, assign the system response for the case where the user has not maintained the user group or where there are no entries.

d) Assign a reference user group which can be used to set up the menu, if necessary.

Actions in the action menu

Include the new entries for the user group.