A package is a namespace that organizes a set of related classes and interfaces. Conceptually you can think of packages as being similar to different folders on your computer. You might keep HTML pages in one folder, images in another, and scripts or applications in yet another. Because software written in the Java programming language can be composed of hundreds or thousands of individual classes, it makes sense to keep things organized by placing related classes and interfaces into packages.

The Java platform provides an enormous class library (a set of packages) suitable for use in your own applications. This library is known as the "Application Programming Interface", or "API" for short. Its packages represent the tasks most commonly associated with general-purpose programming. For example, a String object contains state and behavior for character strings; a File object allows a programmer to easily create, delete, inspect, compare, or modify a file on the filesystem; a Socket object allows for the creation and use of network sockets; various GUI objects control buttons and checkboxes and anything else related to graphical user interfaces. There are literally thousands of classes to choose from. This allows you, the programmer, to focus on the design of your particular application, rather than the infrastructure required to make it work.

Syntax of the Package in Java:

How to use package

There are 2 ways in order to use the public classes stored in package.

Thus, the code that we use to call the HelloWorld and HelloMoon class should be

Note that we can call public classes stored in the package level we do the import only. We can't use any classes that belong to the subpackage of the package we import. For example, if we import package world, we can use only the HelloWorld class, but not the HelloMoon class.

How to create a package

At first create a folder like a name <cei> and store a program.

After the creation of the program then compile this program with following syntax:

If compile this part with successfully then write down this program.

Then compile the code cal.java

After that we interpreting this program cal.java

Then this call.java will be interpreted and run this program and show the output

This is Armstrong no. 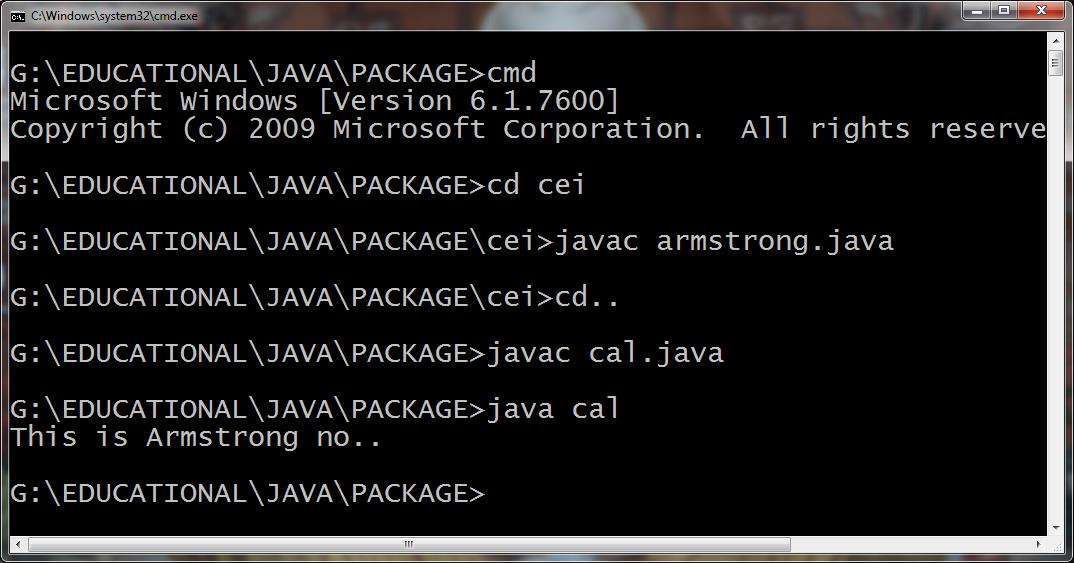 CLASSPATH is an environment variable (i.e., global variables of the operating system available to all the processes) needed for the Java compiler and runtime to locate the Java packages used in a Java program. (Why not call PACKAGEPATH?) This is similar to another environment variable PATH, which is used by the CMD shell to find the executable programs.

CLASSPATH can be set in one of the following ways:

To check the current setting of the CLASSPATH, issue the following command:

How to put two public classes in a package?

Two public classes in a package, have two source files containing one public class, but keep the package name same . For example.

Let's take an example, Sun Microsystem has definded a package named java that contains many classes like System, String, Reader, Writer, Socket etc. These classes represent a particular group e.g. Reader and Writer classes are for Input/Output operation, Socket and ServerSocket classes are for networking etc and so on. So, Sun has subcategorized the java package into subpackages such as lang, net, io etc. and put the Input/Output related classes in io package, Server and ServerSocket classes in net packages and so on.

Advantages of Packages in java

Drop us a Query

Enroll Now for a free demo

By providing us with your details, We wont spam your inbox.

Drop us a Query