Welcome to Core Java  Tutorials. The objective of these tutorials is to provide an in-depth understanding of Core Java.

In addition to free Core Java  Tutorials, we will cover common interview questions, issues, and how to’s of Core Java.

The prime reason behind the creation of Java was to bring portability and security features into a computer language. Besides these two major features, there were many other features that played an important role in molding out the final form of this outstanding language.

Java is easy to learn and its syntax is quite simple, clean, and easy to understand. The confusing and ambiguous concepts of C++ are either left out in Java or they have been re-implemented in a cleaner way.

Eg: Pointers and Operator Overloading are not there in java but were an important part of C++.

In java, everything is an object which has some data and behavior. Java can be easily extended as it is based on Object Model.

Java makes an effort to eliminate error-prone codes by emphasizing mainly on compile-time error checking and runtime checking. But the main areas which Java improved were Memory Management and mishandled Exceptions by introducing automatic Garbage Collector and Exception Handling.

Unlike other programming languages such as C, C++, etc which are compiled into platform-specific machines. Java is guaranteed to be write-once, run-anywhere language.

On compilation, the Java program is compiled into bytecode. This bytecode is platform-independent and can be run on any machine, plus this bytecode format also provides security. Any machine with Java Runtime Environment can run Java Programs.

When it comes to security, Java is always the first choice. With java secure features it enables us to develop a virus-free, temper free system. Java program always runs in Java runtime environment with almost null interaction with system OS, hence it is more secure.

Java multithreading feature makes it possible to write programs that can do many tasks simultaneously. The benefit of multi-threading is that it utilizes the same memory and other resources to execute multiple threads at the same time, like While typing, grammatical errors are checked along.

The compiler generates bytecodes, which have nothing to do with particular computer architecture, hence a Java program is easy to interpret on any machine.

Java Byte code can be carried to any platform. No implementation-dependent features. Everything related to storage is predefined, for example, the size of primitive data types

Java is an interpreted language, so it will never be as fast as a compiled language like C or C++. But, Java enables high performance with the use of a just-in-time compiler.

Each variable has a data type. The data type determines what kind of data the variable can contain, and what operations you can execute on it. For instance, a variable could be a number. Numbers can be added, subtracted, multiplied, divided, etc. Or, a variable could be a string (text). String's can be divided into substrings, searched for characters, concatenated with other strings, etc. Java comes with a set of built-in data types. These data types are described in more detail in the text on Java data types.

Here is a simple Java variable declaration and operation example. Don't worry if you don't understand it now. Later texts in this Java language tutorial explains the details. The purpose of the example is just to give you a feeling for how working with Java variables look.

The first line of this example declares a variable named myNumber of the data type int. An int is a 32-bit integer (number without fractions).

The second line sets the value of the myNumber variable to 0.

The third line adds 5 to the current value of myNumber

Operations in Java are the instructions you can use to process the data in variables. Some operations read and write the values of variables (as you have already seen examples of), while other operations control the program flow. The most important operations are:

All of these operations are explained in detail in their own texts.

Here are a few examples of operations:

If you think of a factory producing lots and lots of the same items, then the class would be the blueprint/manual of how the finished product should look, and the objects would be each of the finished products. If the factory produced cars, then the blueprint/design manual of the cars to produce corresponds to a Java class, and the physical cars produced corresponds to Java objects.

Here is a simple diagram illustrating the principle of objects being of a certain class. The class determines what fields and methods the objects of that class have. 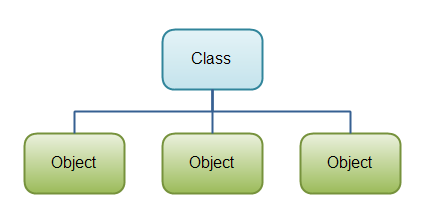 A Java class can contain fields, constructors, and methods

This example declares a class named Car. The Car class does not contain any fields, constructors, or methods. It is empty. The example primarily serves to show you an example of how a class declaration looks in Java code.

A field is a variable that belongs to a class or an object. It is a piece of data, in other words. For instance, a Car class could define the field brand which all Car objects would have. Each Car object could then have a different value for the brand field.

Fields are covered in more detail in the text on Java fields.

Here is the Car class declaration from above with a field name brand added:

This example declares a field named brand of data type String which is text.

Constructors are a special kind of method that is executed when an object of that class is created. Constructors typically initialize the object's internal fields - if necessary.

Constructors are covered in more detail in the text on Java constructors.

Here is the Car class from before with a constructor that initializes the brand field:

Methods are groups of operations that carry out a certain function together. For instance, a method may add to numbers, and divide it by a third number. Or, a method could read and write data in a database, etc.

Methods are typically used when you need to group operations together, that you need to be able to execute from several different places. Or, if you just want your code to be easier to read. In other programming languages, methods may be called "procedures" or "functions".

Methods are covered in more detail in the text on Java methods.

Here is the Car class from before with a single, simple method named getBrand added:

Java language has a rich implementation of data types. Data types specify size and the type of values that can be stored in an identifier.

In java, data types are classified into two categories :

A primitive data type can be of eight types:

Once a primitive data type has been declared its type can never change, although in most cases its value can change. These eight primitive types can be put into four groups.

Characters: This group represents char, which represent symbols in a character set, like letters and numbers.

Boolean: This group represents boolean, which is a special type for representing true/false values. They have defined as constants of the language. example: boolean b=true;

For an Indepth knowledge on core java, click on below