Multiple Cliques In System (OR) High Level In TeraData

What is a clique?

What is meant by AMP in Teradata?

AMP, an acronym for "Access Module Processor," is the type of vproc (Virtual Processor) used to manage the database, handle file tasks and manipulate the disk subsystem in the multi-tasking and possibly parallel-processing environment of the Teradata Database. AMP contains Database Management Subsystem and it performs the below operations:

What is a Vdisk?

A logical disk, logical volume, or virtual disk (VD or vdisk for short) is a virtual device that provides an area of usable storage capacity on one or more physical disk drive(s) in a computer system.

What is the Teradata database?

Teradata is a relational database management system (RDBMS) that is: Teradata is an open system, running on a UNIX MP-RAS or Windows server platform. Teradata is capable of supporting many concurrent users from various client platforms. Teradata is compatible with industry standards (ANSI compliant).
Cliques provide data accessibility if a node fails for any reason,  Proms are distributed across all nodes in the system. Large multiple node systems will have clique mechanisms associated with them

In the event of a node failure, cliques provide for data access through vproc migration. When a node resets, the following happens to the AMPs:

The diagram below shows three cliques. The nodes in each clique are cabled to the same disk arrays. The overall system is connected by the BYNET. If one node goes down in a clique the vprocs will migrate to the other nodes in the clique, so data remains available. However, system performance decreases due to the loss of a node. System performance degradation is proportional to the clique size. 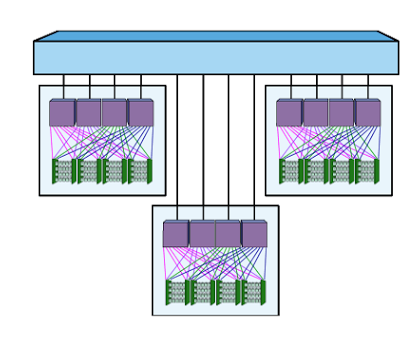 It acts as the "Message Communication" layer between components.

POINT-POINT: One msg from PE - One Amp

MULTICAST: One msg from PE- Many Amps

BROADCAST: One msg from PE - All Amps

POINT-POINT: One msg from One Node to Another Node

MULTICAST: One msg from One Node to Many Node

BROADCAST: One msg from One Node to All Nodes 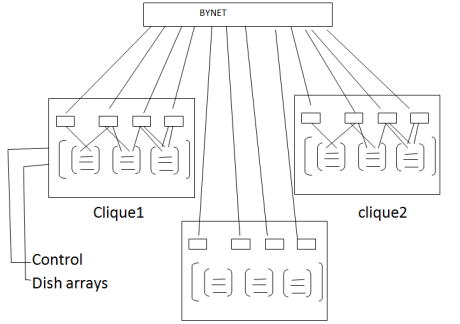 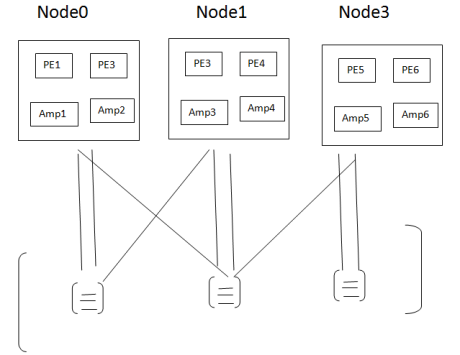 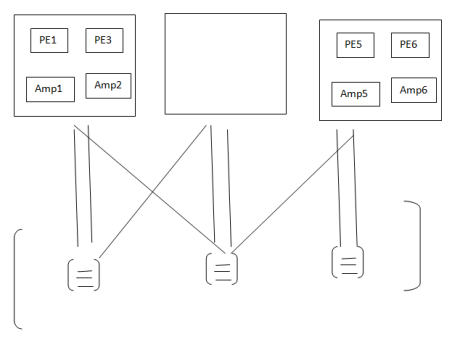 Every multi-system environment will have multiple cliques, each clique contains an equal number of nodes. Clique is nothing but group of nodes sharing common disk drives here the advantage is if any node goes down the virtual process migrate to other nodes to perform the operation.in this way, it provides high availability of data even node goes down.