The Java Virtual Machine is the cornerstone of the Java platform. It is the component of the technology responsible for its hardware- and operating system-independence, the small size of its compiled code, and its ability to protect users from malicious programs.

What is Java Virtual Machine?

A Java virtual machine (JVM), an implementation of the Java Virtual Machine Specification, interprets compiled Java binary code (called bytecode) for a computer's processor (or "hardware platform") so that it can perform a Java program's instructions. Java was designed to allow application programs to be built that could be run on any platform without having to be rewritten or recompiled by the programmer for each separate platform. A Java virtual machine makes this possible because it is aware of the specific instruction lengths and other particularities of the platform.

What do you mean by bytecode in Java?

Programming code that, once compiled, is run through a virtual machine instead of the computer processor. Bytecode is the compiled format for Java programs. Once a Java program has been converted to bytecode, it can be transferred across a network and executed by Java Virtual Machine (JVM).

Is JVM is platform independent?

The JVM is not written in Java and hence cannot be platform independent. The JVM must be platform dependent to allow your Java to run on the specific platform. A JVM for Windows will translate your Java into different system calls than a JVM for OS X.

What is Oracle and Java?

Java is a set of computer software and specifications developed by Sun Microsystems, later acquired by Oracle Corporation, that provides a system for developing application software and deploying it in a cross-platform computing environment.

What is Java software for?

Java is a programming language that developers use to create applications on your computer. Chances are you've downloaded a program that required the Java runtime, and so you probably have it installed it on your system. Java also has a web plug-in that allows you to run these apps in your browser.

The JVM specification defines the subsystems and their external behavior. The JVM has the following major subsystems:

Execution Engine. Responsible for executing instructions from the data areas.The data areas occupy memory that is allocated by the JVM from the underlying OS. 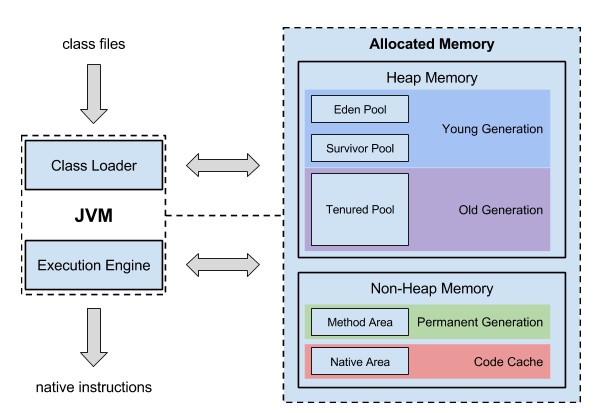 The execution engine executes commands from the bytecode loaded into the data areas one by one. To make the bytecode commands readable to the machine, the execution engine uses two methods. Although JIT compilation takes more time than interpretation, it is done only once for a method that might get called thousands of times. Running such method as native code saves a lot of execution time compared to interpreting each command one by one every time it is encountered. JIT compilation is not a requirement of the JVM specification, and it is not the only technique that is used to improve JVM performance. The specification defines only which bytecode commands relate to which native code; it is up to the implementation to define how the execution engine actually performs this conversion.

The JVM runs in a single process, but it can execute several threads concurrently, each one running its own method. This is an essential part of Java. An application such as an instant messenger client, runs at least two threads; one that waits for user input and one that checks the server for incoming messages. Another example is a server application that executes requests in different threads: sometimes each request can involve several threads running concurrently. All threads share the memory and other resources available to the JVM process. Each JVM process starts a main thread at the entry point (the main() method). Other threads are started from it and present an independent path of execution. Threads can run in parallel on separate processors, or they can share one processor. The thread scheduler controls how threads take turns executing on a single processor.

The performance of the JVM depends on how well it is configured to match the functionality of the application. Although memory is automatically managed using garbage collection and memory reallocation processes, you have control over their frequency. In general, the more memory you have available for your application, the less memory management processes are required, which pause your application. If garbage collections are occurring more frequently than you would want, you can start the JVM with more maximum heap size. The longer it takes for a generation of the heap to fill up, the fewer garbage collections occur. To configure the maximum heap size, use the -Xmx option when you start the JVM. By default, the maximum heap size is set to either 1/4th of the physical memory available to the OS, or to 1 GB (whichever is the smallest). If the problem is with memory reallocation, you can set the initial heap size to be the same as the maximum. This means that the JVM will never need to allocate more memory to the heap. However, you will also lose the adaptive memory optimization gained from dynamic heap sizing. The heap will be of fixed size from the moment you start your application. To configure the initial heap size, use the -Xms option when you start the JVM. By default, the initial heap size is set to either 1/64th of the physical memory available to the OS, or to some reasonable minimum that is different for different platforms (whichever is the largest). If you know which garbage collections (minor or major) are causing performance degradation, you can set the ratio between the young and old generations without changing the overall heap size. For applications that create a lot of short-lived objects, increase the size of the young generation (this will leave less memory for the old generation). For applications that operate with a lot of longer surviving objects, increase the size of the old generation (by setting less memory for the young generation). The following ways can be used to control the sizes of the young and old generations. Most applications (especially servers) require concurrent execution, handling a number of tasks. Some of these tasks are more important at a given moment, while others are background tasks that can be executed whenever the CPU is not busy doing anything else. Tasks are executed in different threads. For example, a server may have a low-priority thread that calculates statistics based on some data and starts a higher-priority thread to handle incoming data, and another higher-priority thread to serve a request for some of the data that was calculated. There can be many sources of data, and many clients requesting data from the server. Each request will briefly stop the execution of the background calculation thread to serve the request. So you have to monitor the number of threads that are running and make sure there is enough CPU time for the thread that is making the necessary calculations. Each thread has a stack that holds the method calls, return addresses, and so on. Some memory is allocated for the stack, and if there are too many threads, this can lead to an OutOfMemory error. Even if you have enough heap memory allocated for objects, your application may be unable to start a new thread. In this case, consider limiting the maximum size of the stack in threads. To configure the thread stack size, use the -Xss option when you start the JVM. By default, the thread stack size is set to 320 KB or 1024 KB, depending on the platform.

Whether you are developing or running a Java application, it is important to monitor the performance of the JVM. Configuring the JVM is not a one-time affair, especially if you are dealing with a server running on Java. You have to constantly check the allocation and usage of both heap and non-heap memory, the number of threads that the application creates, and the number of classes that are loaded into memory. These are the core parameters. Using the Anturis Console, you can set up monitoring of the JVM for any hardware component (such as a computer running a Tomcat web server) in your infrastructure by adding the JVM monitor to the component. The JVM monitor can measure the following metrics.

JamVM is an open-source Java Virtual Machine that aims to support the latest version of the JVM specification, while at the same time being compact and easy to understand. JamVM must be used in conjunction with a Java class-library to make a full Java Runtime Environment. Compatible class-libraries are GNU Classpath or the class-library from OpenJDK.

For those interested in the design of virtual machines, JamVM includes a number of optimisations to improve speed and reduce foot-print. A list, in no particular order, is given below. For detail info on Java click on Java Tutorials