How to install MongoDB

How to install MongoDB

In this tutorial, we will show you how to install MongoDB on Windows. MongoDB 2.2.3 Windows 7 Note: The MongoDB does not require installation, just download and extracts the zip file, configure the data directory and start it with command “mongod“.

In MongoDB, it contains only 10+ executable files (exe) in the bin folder. This is true, and that are the required files to MongoDB, it’s really hard to believe for a developer like me who come from a relation database background. Figure : Files under $MongoDB/bin folder

Note:It’s recommended to add $MongoDB/bin to Windows environment variable, so that you can access the MongoDB’s commands in command prompt easily. 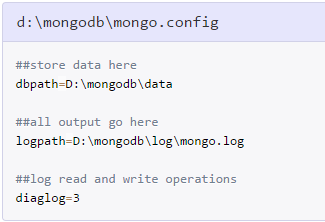 Note: MongoDB need a folder (data directory) to store its data. By default, it will store in “C:\data\db“, create this folder manually. MongoDB won’t create it for you. You can also specify an alternate data directory with --dbpath option.

Uses mongo.exe to connect to the started MongoDB server.

To fix it, run the Command Prompt with Administrative Privileges – right click on the command prompt icon, select run as administrator.