Welcome to the Weblogic Tutorials. The objective of these tutorials is to provide an in-depth understanding of the Weblogic Application Server.

In addition to free Weblogic Tutorials, we will also cover common interview questions, how-to tutorials and issues and their resolutions of Weblogic Application Server

Q1) What is the Weblogic Server?

Q2) What is the use of the Weblogic Server?

Ans: WebLogic server is based on Java 2 Platform, Enterprise Edition (J2EE), the standard platform used to create Java-based multi-tier enterprise applications. J2EE platform technologies were developed through the efforts of BEA Systems and other vendors in collaboration with the main developer, Sun Microsystems.

Q4) What is the use of the domain in Weblogic?

Ans: A WebLogic Domain is a logically related group of WebLogic Server instances (Admin + managed Servers)that you manage from a single set of configuration artifacts. A Weblogic Domain contains exactly one Administration Server and zero or more than zero managed Servers.

The table below lists major standards supported by the WebLogic Server product version.

Because the WebLogic Server management system is based on Java EE and other standards, it integrates with systems that are frequently used to manage other software and hardware components. In addition, WebLogic Server includes several of its own standards-based, extensible utilities. Alternatively, you can use APIs to create custom management utilities.

The software components of a multitier architecture consist of three tiers: 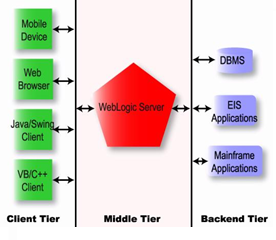 Proxy some requests to Application Servers 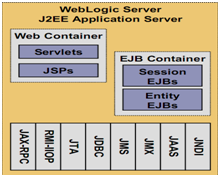 Provide services that support the execution and availability of deployed applications

Application Server: A server that exposes business logic to client applications through various protocols including HTTP.

Application Server: To deliver various applications to another device, it allows everyone in the network to run software off of the same machine.

Web Server: Keeping HTML, PHP, ASP, etc files available for the web browsers to view when a user accesses the site on the web, handles HTTP requests from clients.

Web Server: Does not add any

For In-depth Knowledge on WebLogic Server, Read Below Tutorials:

Our course design of tutorials is practical and informative. At TekSlate, we offer resources to help you learn various IT courses. We avail of both written material and demo video tutorials. For in-depth knowledge and practical experience explore Online WebLogic Training.