Welcome to Ruby on rails Tutorials. Ruby on Rails is an extremely productive web application framework written in Ruby by David Heinemeier Hansson. This tutorial gives you a complete understanding of Ruby on Rails.

In addition to Ruby on rails tutorials, we will cover common interview questions and issues of Ruby on Rails.

Ruby is the successful combination of Smalltalk conceptual elegance, Python's ease of use and learning, and Perl's pragmatism.

Ruby is a high-level programming language which Interpreted like Perl, Python, Tcl/TK, and Object-oriented like Smalltalk, Eiffel, Ada, Java.

Rails is a software library that extends the Ruby programming language. David Heinemeier Hansson is its creator. He gave it the name “Ruby on Rails,” though it is often just called “Rails.” Rails Strengths is packed with features that make you more productive, with many of the following features building on one other.

Inclined to build a profession as Ruby on Rails Developer? Then here is the blog post on, explore Ruby on RailsTraining

Here is a sample Ruby code to print "Hello Ruby"

This will produce the following result −

A recommended workflow for creating Rails Application is as follows −

First, check if you already have Ruby installed. Open the command prompt and type ruby -v. If Ruby responds, and if it shows a version number at or above 2.2.2, then type gem --version. If you don't get an error, skip the Install Ruby step. Otherwise, we'll install a fresh Ruby.

If Ruby is not installed, then download an installation package from rubyinstaller.org. Follow the download link, and run the resulting installer. This is an exe file rubyinstaller-2.2.2.x.exe and will be installed in a single click. It's a very small package, and you'll get RubyGems as well along with this package. Please check the Release Notes for more detail.

Install Rails − With Rubygems loaded, you can install all of the Rails and its dependencies using the following command through the command line. 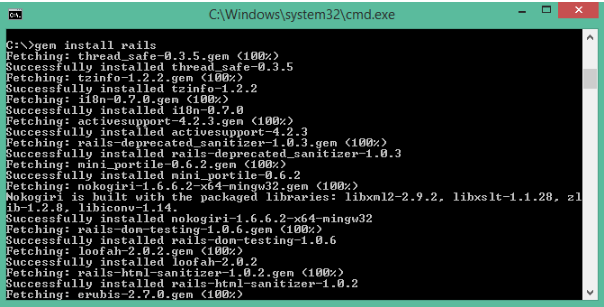 Note − The above command may take some time to install all dependencies. Make sure you are connected to the internet while installing gems dependencies

Use the following command to check the rails version.

First, we define a default value for all environments in config/application.rb:

module Configurator
class Application < Rails::Application
# By default, let OSX resolve the path to the binary
config.wkhtmltopdf = "wkhtmltopdf"
end
end
Then we override the default setting as necessary in config/environments/:
Configurator::Application.configure do
# Settings specified here will take precedence over those in config/application.rb
# Point Heroku explicitly to the binary we need to use
config.wkhtmltopdf = "#{Rails.root}/bin/wkhtmltopdf"
end
Lastly, we access the configuration element in our code:
cmd = [Configurator::Application.config.wkhtmltopdf, url, tmpfile.path]
Just use Rails environment support and config to store your own configuration elements. They’re trivial to set, trivial to access, and require no third-party gems or custom text files.

Advantages of Ruby on Rails