Welcome to Node.js Tutorials. The objective of these tutorials is to provide in depth understand of Node.js.

In addition to free Node.js Tutorials, we will cover common interview questions, issues and how to’s of Node.js.

Node.js is a cross-platform runtime environment and library for running JavaScript applications outside the browser. It is used for creating server-side and networking web applications. It is open source and free to use.

Many of the basic modules of Node.js are written in JavaScript. Node.js is mostly used to run real-time server applications.

The definition given by its official documentation is as follows:

Node.js is a platform built on Chrome's JavaScript runtime for easily building fast and scalable network applications. Node.js uses an event-driven, non-blocking I/O model that makes it lightweight and efficient, perfect for data-intensive real-time applications that run across distributed devices.? 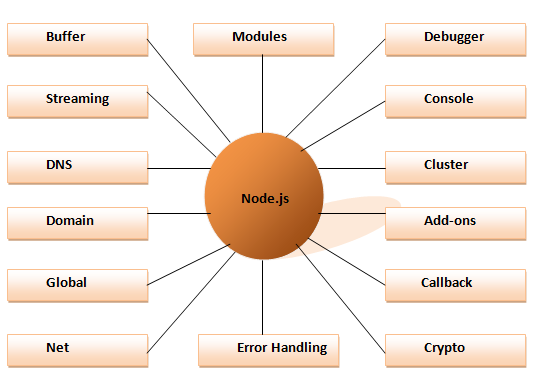 Ubuntu 16.04 contains a version of Node.js in its default repositories that can be used to easily provide a consistent experience across multiple systems. At the time of writing, the version in the repositories is v4.2.6. This will not be the latest version, but it should be quite stable, and should be sufficient for quick experimentation with the language.

In order to get this version, we just have to use the apt package manager. We should refresh our local package index first, and then install from the repositories:

If the package in the repositories suits your needs, this is all that you need to do to get set up with Node.js. In most cases, you'll also want to also install npm, which is the Node.js package manager. You can do this by typing:

This will allow you to easily install modules and packages to use with Node.js.

Because of a conflict with another package, the executable from the Ubuntu repositories is called nodejsinstead of node. Keep this in mind as you are running software.

How To Install Using a PPA

An alternative that can get you a more recent version of Node.js is to add a PPA (personal package archive) maintained by NodeSource. This will have more up-to-date versions of Node.js than the official Ubuntu repositories, and allows you to choose between Node.js v4.x (the long-term support version, supported until April of 2017) and v6.x (the current version, which will actively receive new features until it transitions to long-term support).

First, you need to install the PPA in order to get access to its contents. Make sure you're in your home directory, and use curl to retrieve the installation script for your preferred version, making sure to replace6.x with the correct version string:

You can inspect the contents of this script with nano (or your preferred text editor):

And run the script under sudo:

The PPA will be added to your configuration and your local package cache will be updated automatically. After running the setup script from nodesource, you can install the Node.js package in the same way that you did above:

The nodejs package contains the nodejs binary as well as npm, so you don't need to install npmseparately. However, in order for some npm packages to work (such as those that require compiling code from source), you will need to install the build-essential package:

An alternative to installing Node.js through apt is to use a specially designed tool called nvm, which stands for "Node.js version manager".

To start off, we'll need to get the software packages from our Ubuntu repositories that will allow us to build source packages. The nvm script will leverage these tools to build the necessary components:

Once the prerequisite packages are installed, you can pull down the nvm installation script from the project's GitHub page. The version number may be different, but in general, you can download it withcurl:

And inspect the installation script with nano:

Run the script with bash:

It will install the software into a subdirectory of your home directory at ~/.nvm. It will also add the necessary lines to your ~/.profile file to use the file.

To gain access to the nvm functionality, you'll need to log out and log back in again, or you can source the~/.profile file so that your current session knows about the changes:

Now that you have nvm installed, you can install isolated Node.js versions.

To find out the versions of Node.js that are available for installation, you can type:

As you can see, the newest version at the time of this writing is v6.0.0. You can install that by typing:

Usually, nvm will switch to use the most recently installed version. You can explicitly tell nvm to use the version we just downloaded by typing:

When you install Node.js using nvm, the executable is called node. You can see the version currently being used by the shell by typing:

If you have multiple Node.js versions, you can see what is installed by typing:

If you wish to default one of the versions, you can type:

This version will be automatically selected when a new session spawns. You can also reference it by the alias like this:

Each version of Node.js will keep track of its own packages and has npm available to manage these.

You can have npm install packages to the Node.js project's ./node_modules directory by using the normal format. For example, for the express module:

If you'd like to install it globally (making it available to the other projects using the same Node.js version), you can add the -g flag:

This will install the package in:

Installing globally will let you run the commands from the command line, but you'll have to link the package into your local sphere to require it from within a program:

You can learn more about the options available to you with nvm by typing:

Extremely fast: Node.js is built on Google Chrome's V8 JavaScript Engine, so its library is very fast in code execution.

I/O is Asynchronous and Event Driven: All APIs of Node.js library are asynchronous i.e. non-blocking. So a Node.js based server never waits for an API to return data. The server moves to the next API after calling it and a notification mechanism of Events of Node.js helps the server to get a response from the previous API call. It is also a reason that it is very fast.

Highly Scalable: Node.js is highly scalable because event mechanism helps the server to respond in a non-blocking way.

No buffering: Node.js cuts down the overall processing time while uploading audio and video files. Node.js applications never buffer any data. These applications simply output the data in chunks.

Open source: Node.js has an open source community which has produced many excellent modules to add additional capabilities to Node.js applications.

License: Node.js is released under the MIT license.