Welcome to JavaFX  Tutorials. The objective of these tutorials is to provide in depth understand of JavaFX .

In addition to free JavaFX Tutorials, we will cover common interview questions, issues and how to’s of JavaFX .

JavaFX is a software platform for developing and delivering rich internet applications (RIAs) that can run across a wide variety of devices. JavaFX is the next generation GUI toolkit for the Java platform. It is fully integrated with recent versions of Java SE Runtime Environment (JRE) and the Java Development Kit (JDK).

JavaFX has the following main parts:

Prism is a high-performance graphics engine for 2D and 3D graphics. Glass windowing toolkit is a platform-dependent layer that connects JavaFX to the native operating system. It provides native operating system services, like managing windows, events, timers, and surfaces. Media engine provides tools to create media applications that enable media playback in the desktop window or within a web page on supported platforms. Web engine is a web browser engine that supports HTML5, CSS, JavaScript, DOM, and SVG.

JavaFX is a language for creating and deploy rich client graphical user interface(GUI) applications. JavaFX is a next generation graphical user interface toolkit. It is intended to replace java Swing as the standard GUI library for Java SE.IT enables developers to design, create, test, debug, and deploy rich client applications. JavaFX has included a feature of customized style using Cascading Style Sheets (CSS) style and another thing is that it include XML language so it makes easy to build or develop an application.

IN JavaFX, there is a drag and drop designer available which is known as scene builder. By this, it makes our work very easy to design an application. So we have to just drag and drop then customize CSS and you can also add functionality.

The appearance of JavaFX applications can be customized by CSS and it separates look and style from implementation so that developers can concentrate on internal Development (functionality), not on the look and feels. If you prefer to design UIs without writing code, then use JavaFX Scene Builder (as describe above). As you design the UI, Scene Builder creates FXML markup that can be used to add the business logic.

JavaFX application contains one or more stages which corresponds to windows. Each stage has a scene attached to it. Each scene can have an object graph of controls, layouts etc. attached to it, called the scene graph. These concepts are all explained in more detail later. Here is an illustration of the general structure of a JavaFX application: 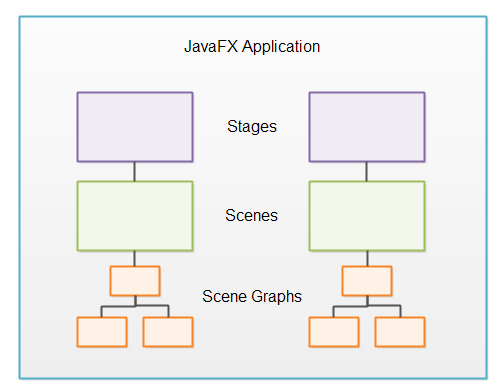 The stage is the outer frame for a JavaFX application. The stage typically corresponds to a window. In the early days where JavaFX could run in the browser, the stage could also refer to the area inside the web page that JavaFX had available to draw itself.

Since the deprecation of the Java browser plugin JavaFX is mostly used for desktop applications. Here, JavaFX replaces Swing as the recommended desktop GUI framework. And I must say, that JavaFX looks a whole lot more consistent and feature rich than Swing.

When used in a desktop environment, a JavaFX application can have multiple windows open. Each window has its own stage.

-It is easy to learn because it is very similar to Java swing and reason is we can develop and design using scan builder.

-A new language is added to JavaFX called FXML, which like HTML or XML (so it doesn’t mean that it is an alternative to HTML but it’s an alternative to Java Swing) is used only to define the interface of an application, So that it completely separate from the logic of the code

-The library of JavaFX is created using Java native code or Java API.

-It supports both 2d and 3d design and also animation. So it’s also a great feature of JavaFX in graphics.

-Another feature is that existing application of swing can be updated by the new JavaFX application.

-It also supports Webview which is a web component we can embeded web pages in javafx application.

-JavaFX is also platform independent so that it can run any platform using the JVM.