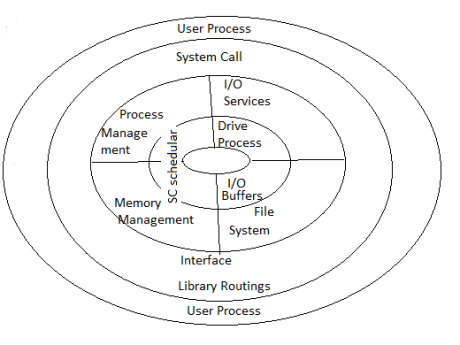 The next level provides all the kernel services

This allows the program to invoke protected kernel routines to perform system functions.

*protected from other users *Have no access to Unix Kernel routines except through system call interface *cannot directly access Kernel memory space.

In addition to the software levels, Unix also features two  “rings of protection ” from inadvertent programming errors or malisons attacks   that might damage other user’s processes  or the kernel’s processes and data structures.

The inner protected ring is known as kernel space

This consist of memory starting above the kernel and includes the4 rest of available memory.

This memory is protected ; the system prevents one user from interfering with another.

A process operating in this memory region is said to be in user mode.

Kernel space is the region at memory where all kernel service are provided via kernel process.

Kernel Space is a privileged area ; the area the user has access to it only through the system call interface.

A user does not have direct access to either all machine instructions or devices.

A kernel process does have direct access to both.

A user process becomes a kernel process when it executes a system call and starts executes kernel code.

Since users and the kernel do not share memory address space , the mechanism for moving data between them is important.

When a system call is executed , the arguments to the call and the corresponding kernel routine  identification are passed from user space to kernel space.

Kernel routine ID is usually passed either via a hardware machine register or via the stack.

System call arguments are passed in the user area of the calling process.

User area of a process contains information a bout the process the Kernel needs while the process is running.

A pointer to the process table entry containing information for scheduling such as priority.

Kernel Stack for the process.