Determines partition based on key-value(s). One or more keys with different data types are supported.

Partition based on the modulus of key divided by the number of partitions. The Key is an Integer type.

Example: Key is OrderNumber (Integer type). Rows with the same order number will all go into the same partition.

This figure gives a clear view of Key-based Partitioning and repartitioning.

Ascential parallel technology operates by a divide-and-conquer technique, splitting the largest integration jobs into subsets ("partition parallelism") and flowing these subsets concurrently across all available processors ("pipeline parallelism"). This combination of pipeline and partition parallelism delivers true linear scalability (defined as an increase in performance proportional to the number of processors) and makes hardware the only mitigating factor to performance. However, downstream processes may need data partitioned differently. Consider a transformation that is based on customer last name, but the enriching needs to occur on zip code - for house-holding purposes - with loading into the warehouse based on customer credit card number (more on parallel database interfaces below). With dynamic data re-partitioning, data is re-partitioned on-the-fly between processes - without landing the data to disk-based on the downstream process data partitioning needs.

Send all rows down all partitions

Example: Assume 8 nodes are allocated, then in all the 8 nodes all the records will be passed. 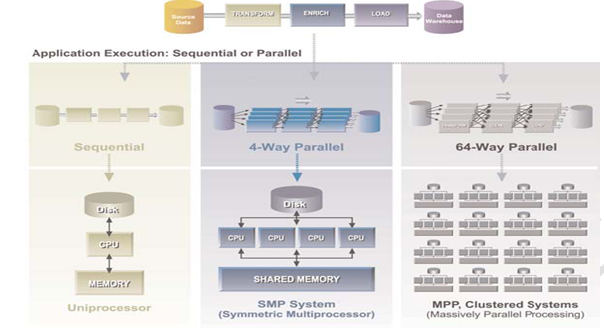 Best allocation of Partitions in DataStage for storage area

Best allocation of Partitions in DataStage for each stage

Inclined to build a profession as Datastage Developer? Then here is the blog post on, explore Datastage Training

In this job, extraction is made serial in both the DB2 stages. All the records will reside in 1 partition. As input link1 of the Sort stage has been “hash” partitioned, 1 partition will split into 8 partitions based on the given key(s), and records are also sorted based on the joining key(s). In the Join stage for link2, the “same” partition is given, and on the other side for link3 with the same key(s) “hash” partition and internal sorting is done so that records from 1 partition will split into 8 partitions and also sorted within the partition. Now joining will be done effectively and the records are captured in the dataset with the “same” partition, which will maintain the records in 8 partitions. For 1 partition, 1 page will be created. So, for the entire job, 32 pages will be created.

This will be one of the best ways to design the job for a huge volume of data. But, extracting the records in serial makes performance to go down. Multiple instances can be enabled in this job and can be called in parallel to attain parallelism.

This job is the same as the previous job but extraction alone made in parallel. In extracting the records in the DB2 side, 64 partitions will be created.

This will be one of the best ways to design jobs for a huge volume of data. But, the number of database connections been established is huge.

As the extraction is done in a serial mode in both the DB2 stages, the allocated node will be 1 that is all the records will be in one partition and in all the remaining stages have the “same” partition, so the number of partition is retained as 1 in all the stages. So, the page created for this job will be 4.

This job will work fine for the low records. But for the huge records, it will hang. Since the entire job is in serial mode.

For less or huge records this job will work very fast but it will occupy maximum space in the system. For this job wastage of memory (Paging Issue may come up) happens because 256 pages will be created and sometimes this kind of job will make the entire system to come down.

An unpredictable thing may happen here because it all depends on the stages it will decide on its own since it is an auto partition.

Never use auto partition in the job.

In this case performance wise no issues but will lose the data on the Join stage because on the Link2 it is coming as 8 nodes and on the other side Link3 in 64 nodes so DataStage cannot join the data accurately since Join Stage is depended on the master link. In this case, Link2 is the master link so it will join only with the 8 nodes and it will leave the other 56 nodes which is coming from the Link3. Therefore data coming from that 56 nodes will not be considered.

Never join the link without having the same partitioning key on both sides otherwise data loss may occur and also sort the records before joining.

For an in-depth Knowledge on DataStage, click on below