Q1. What is Ansible?

Ansible is a software tool to deploy an application using ssh without any downtime.It is also used to manage and configure software applications. Python language develops Ansible.

Q2. What are the Advantages of Ansible? 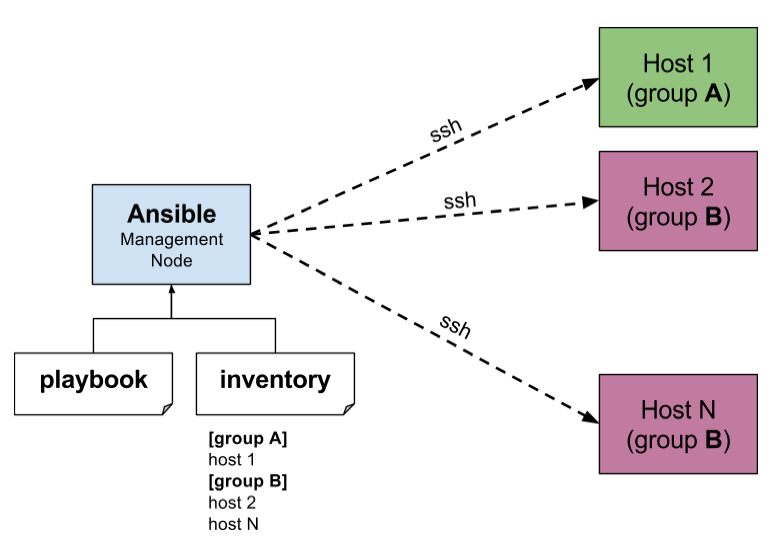 Q4. What’s the Use of Ansible?

Ansible can be used in IT infrastructure to manage and deploy software applications to remote nodes. For example, let’s say you need to deploy a single software or multiple software to 100’s of nodes by a single command, here ansible comes into picture, with the help of Ansible you can deploy as many as applications to many nodes with one single command, but you must have a little programming knowledge for understanding the ansible scripts.

We’ve compiled a series on Ansible, title ‘Preparation for the Deployment of your IT Infrastructure with Ansible IT Automation Tool‘, through parts 1-4 and covers the following topics.

Yes, Ansible, Inc makes a great product that makes Ansible even more powerful and easy to use. See Ansible Tower.

Q6. How do I submit a change to the documentation?

Documentation for Ansible is kept in the main project git repository, and complete instructions for contributing can be found in the docs.

Q7. When should I use {{ }}? Also, how to interpolate variables or dynamic variable names

Q8. How to install Ansible

The best way to get Ansible for Ubuntu is to add the project's PPA (personal package archive) to your system.

To do this effectively, we need to install the software-properties-common package, which will give us the ability to work with PPAs easily. (This package was called python-software-properties on older versions of Ubuntu.)

Once the package is installed, we can add the Ansible PPA by typing the following command:

For the PPA addition, press enter.

After that we can refresh our system package, we can see available PPA packages and can install the software.

sudo apt-get install ansible sudo apt-get update Through Ansible, we have the software required to administer our servers.

Q9. How do I generate crypted passwords for the user module?

The mkpasswd utility that is available on most Linux systems is a great option:

If this utility is not installed on your system (e.g. you are using OS X) then you can still easily generate these passwords using Python. First, ensure that the Passlib password hashing library is installed.

Once the library is ready, SHA512 password values can then be generated as follows:

Use the integrated Hashing filters to generate a hashed version of a password. You shouldn’t put plaintext passwords in your playbook or host_vars; instead, use Vault to encrypt sensitive data.

Q10. By enabling Kerberized SSH, How do I get ansible to reuse connections?

Q11. What is the best way to make content reusable/redistributable?

If you have not done so already, read all about “Roles” in the playbooks documentation. This helps you make playbook content self-contained and works well with things like git submodules for sharing content with others.

If some of these plugin types look strange to you, see the API documentation for more details about ways Ansible can be extended.

Q12. How do I see all the inventory vars defined for my host?

You can see the resulting vars you define in inventory running the following command:

Q13. How do I copy files recursively onto a target host?

The “copy” module has a recursive parameter, though if you want to do something more efficient for many files, look at the “synchronize” module instead, which wraps rsync. See the module index for info on both modules.

Ansible can interact with configured clients from the command line with the ansible command, and how you can automate configuration with playbooks run through the ansible-playbook command.

That command will create an azavea.packer directory with the following structure:

Q15. Difference between the Variable name and Environment Variables.

Ansible playbook’s files can be reused in three distinct ways: include roles, and imports. Imports and Include are helpful to create/break up multiple small files of a massive playbook. Roles are primarily used to manage various tasks in a package including handlers, variables, plug-in and other modules. They can also be uploaded and shared by Ansible Galaxy.

Q17. How to copy files into a target host recursively?