Vagrant Boxes are prepackaged development environments that are the foundation of Vagrant. In most cases, this is usually just astripped and naked operating system such as Ubuntu, Debian, or CentOS. Boxes exist with the intention to be provisioned with additional features like Apache and PHP using tools like Chef or Puppet. This is really powerful, but it can be time consuming to setup the first configuration and difficult for beginners. Plus, not everyone has the skill-set of a system admin or work with a huge collaborative team. This post will describe to you how to create your own prepackaged Vagrant Box from and existing virtual machine. In my opinion, it’s the quickest and easiest way for beginners to get started with Vagrant. This way you’ll be able to reuse it over and over and even share it. I feel this generally goes against the main idea of Vagrant where you provision your development environments from a single config. You generally lose a lot of the debugging and configurability of your development environment, but this should be helpful for plenty of developers, teams, and projects regardless.

The first thing you’ll need to do is pick a box that you want to build from. The Vagrant Cloud lets you easily find boxes that people have shared. We’ll be working off of Hashicorp’s (Vagrant’s) Precise64. This box is a good one to work off of because Chef and Puppet are already installed, plus all the settings we’re configured by the creator(s) of Vagrant. 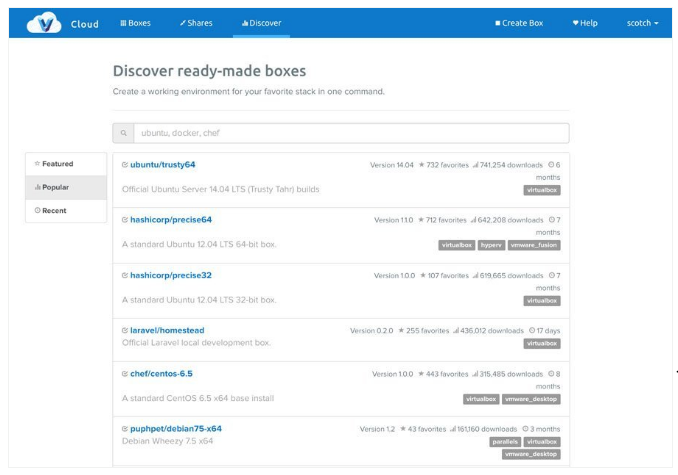 Initialize and Start the Vagrant Box

After you’ve chosen a box, initialize the Vagrant box. Each one is slightly different, but here’s how to do it for the example we’re doing: vagrant init hashicorp/precise64 This will also create a Vagrant file for you. Now, boot the box with Vagrant by doing (it will need to download if it’s the first time using the it): vagrant up

SSH into the Box and Customize It

Make the Box as Small as possible

We’re now going to clean up disk space on the VM so when we package it into a new Vagrant box, it’s as clean as possible. First, remove APT cache sudo apt-get clean Then, “zero out” the drive (this is for Ubuntu): sudo dd if=/dev/zero of=/EMPTY bs=1M sudo rm -f /EMPTY Lastly, let’s clear the Bash History and exit the VM: cat /dev/null > ~/.bash_history && history -c && exit

Repackage the VM into a New Vagrant Box

Add the Box into Your Vagrant Install

The previous command will have created a “mynew.box” file. You can technically put this wherever you want on your computer. Now, let’s add this new Vagrant Box into Vagrant: vagrant box add mynewbox mynew.box This now will “download” the box into your Vagrant install allowing to initiate this from any folder, but before we do this, let’s delete and remove the Vagrant file we built this box from.

We need to now initialize a Vagrant environment from our brand new box using the same command from earlier but referencing the new Box. vagrant init mynewbox

When you initialize the Vagrant environment, it creates a Vagrantfile for you (just like from before). Open the Vagrantfile and delete everything. You can use what was in there as a reference or just use Vagrant’s Official Docs, but we’re going to only use the absolute essentials that I’ve already spelled out for you. Now paste the following bare-bones code into your Vagrantfile: Now let’s create a landing page: vim index.php And add the following line to demo what we just installed with PHP: phpinfo();

Now, visit the IP address from the Vagrantfile in your browser. If everything works, you should see a PHP info dump of the index.php file you just created. 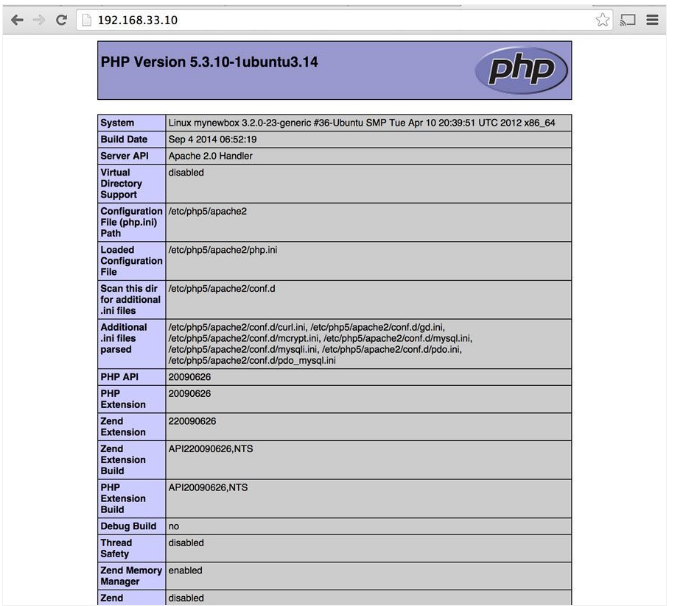 Now that you’ve just created your own Vagrant Base Box from an existing one, you should consider sharing it on the Vagrant Cloud. This way other people can download and use it!