This material is an introduction to how to develop an SAP Business Objects Universe. It is aimed at students at universities, universities, and other educational institutions with limited experience with Business Intelligence.

It can be used in the classroom or for self-study.

On completion of the course, students will be able to understand the basic concepts of a universe and how to design and develop a universe.

The material also serves as a reference for occasional users of SAP systems.

If you would like to become an SAP BO certified professional, then visit Tekslate - A Global online training platform:"SAP BO training and certification course". This course will help you to achieve excellence in this domain.

The learning method used is “guided learning.” The benefit of this method is that knowledge is imparted quickly. Students also acquire practical skills and competencies. As with an exercise, this method explains a process or procedure in detail.

SAP Business Intelligence provides a broad range of reporting tools to facilitate the decision making of different end-users. These tools can interact with data from different data sources. SAP Business Objects provides a semantic layer (universe) that facilitates the interaction with data sources and the extraction of data. This tutorial provided you with a step by step explanation of how to construct a universe which will be utilized in later reporting exercises.

Global Bike International (GBI) is a world-class bicycle company serving both professional and amateur cyclists. The company sells bicycles and accessories. In the touring bike category, GBI’s handcrafted bicycles have won numerous design awards and are sold in over 10 countries. GBI’s signature composite frames are world-renowned for their strength, low weight, and easy maintenance. GBI bikes are consistently ridden in the Tour de France and other major international road races. GBI produces two models of their signature road bikes, a deluxe and a professional model. The key difference between the two models is the type of wheels used, aluminum for the basic model, and carbon composite for the professional model. GBI’s off-road bikes are also recognized as incredibly tough and easy to maintain. GBI off-road bikes are the preferred choice of world champion off-road racers and have become synonymous with performance and strength in one of the most grueling sports in the world. GBI produces two types of off-road bikes, a men’s and women’s models. The basic difference between the two models is the smaller size and ergonomic shaping of the women’s frame.

GBI also sells an Accessories product line comprised of helmets, t-shirts, and other riding accessories. GBI partners with only the highest quality suppliers of accessories which will help enhance riders’ performance and comfort while riding GBI bikes. Figure 1 displays the GBI range of products. 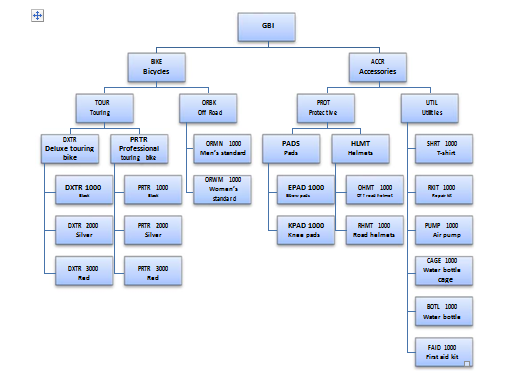 GBI management currently SAP ECC to manage and automate their business processes. They have discovered that one of their departments are using a Microsoft Access database to record sales data. The Department Heads have indicated that they would like the information provided in a user-friendly format. This will facilitate them to gain greater insight to their sales data to understand the trends and sales performance. In response to these concerns, it was decided to build a number of reports using SAP Business Objects Interactive Analysis. To provide the connection between the data source (Microsoft Access) and the reporting tool a universe needs to be created.

What is a Semantic Layer?

Often when database developers build databases their main objectives involve the efficient creation, updating, and deletion of data. They are not usually concerned about whether nondatabase people understand the complexities of the underlying structures. While business users want to create reports based on the data contained in the database to facilitate decision making. The semantic layer insulates the business users from the underlying data complexity while ensuring the business is accessing the correct data sources and using consistent terminology.

The semantic layer enables users to use common business terms rather than the technical database language to access, manipulate, and organize information, it simplifies the complexity of the business data. The following diagram displays the various components of the semantic layer. 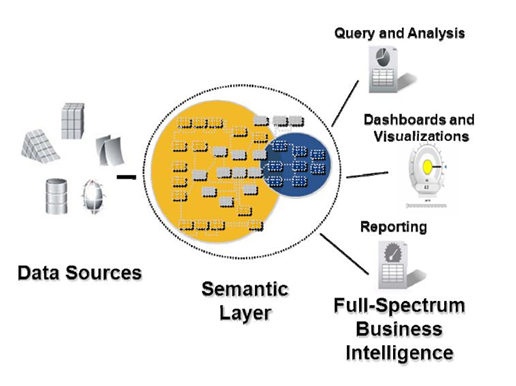 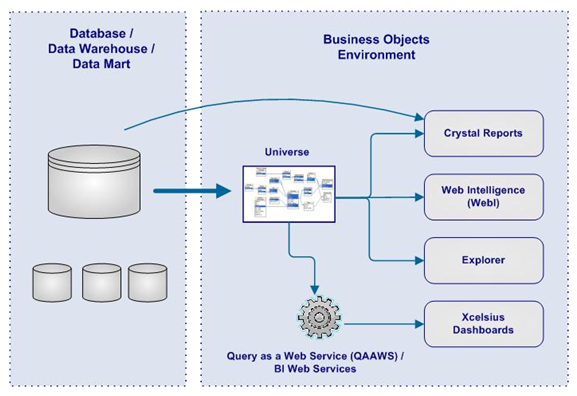 Below is an example of a Universe based on the GBI data. The Universe structure contains: 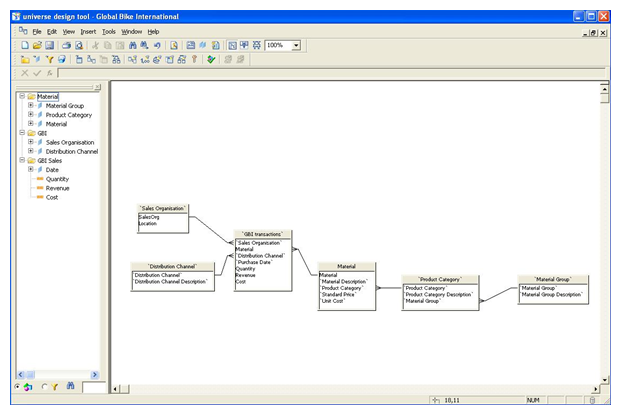 On the right of the screen is the schema of the database. While on the left are Universe objects that are required for reporting. A Universe can be used to connect to a variety of data sources (Databases, Excel, XML, Text, Web Services. The release of SAP Business Objects 4.0 provided functionality to connect directly with SAP solutions and thus a universe is no longer required to connect to SAP.

A data access driver is the software that connects the Universe to your middleware. Data access drivers provided with Business Objects include IBM DB2, Informix, Microsoft SQL Server, Oracle, Sybase, Teradata, Hyperion, Generic OBDC. For this exercise, you are going to use OBDC connection drivers. OBDC (Open Database Connectivity) is Microsoft’s interface for accessing data in a heterogeneous environment of relational and non-relational databases. 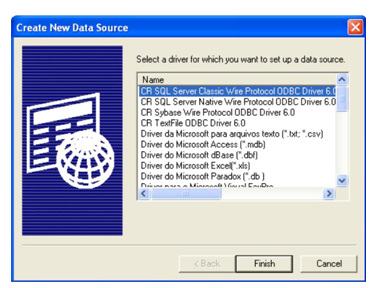 You now need to select the appropriate driver for your data source. For this exercise, you will be using a Microsoft Access database. 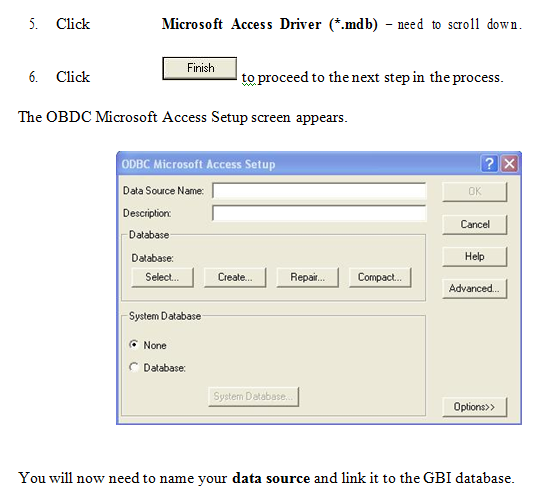 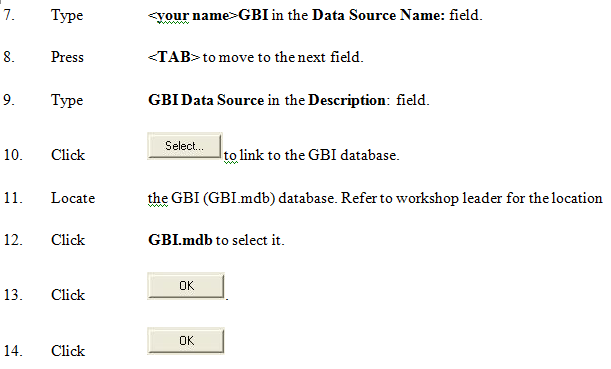 You will notice that your new Data Source connection is listed. 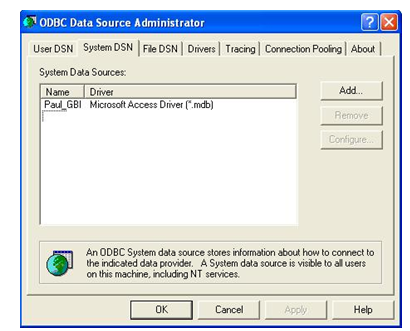 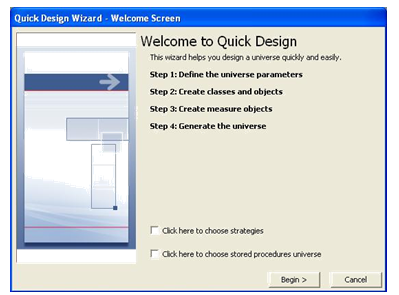 This wizard walks the user through the steps in creating a basic Universe. For the purpose of this exercise, you will initially use the wizard. You can see that there are four steps in the process.

This step involves linking your new universe to the database connection you created previously. 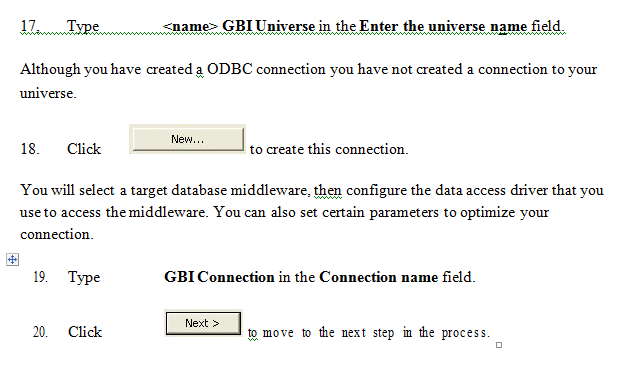 You will now need to select the OBDC driver for Microsoft Access 2007. 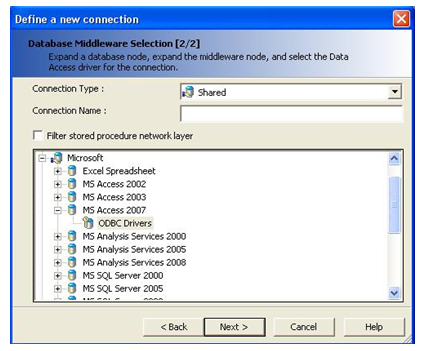 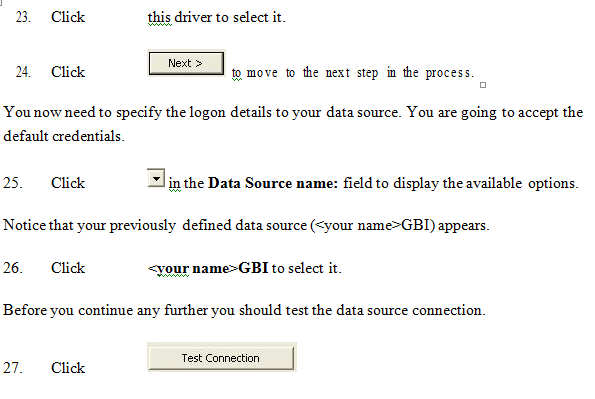 The following message should appear

A Universe uses classes and objects to represent the database’s structures. An object represents a column (data element), calculation, or function in a data source. It represents a meaningful entity, fact, or calculation used in the business environment. Objects are selected to construct a query. Once the query is performed, the objects are returned with values. A class is a logical collection of objects. Most classes in Business Objects correspond to a table in the database. But this may not be user friendly for a business user. The Create Initial Classes and Objects dialog screen lists the tables in the data source. 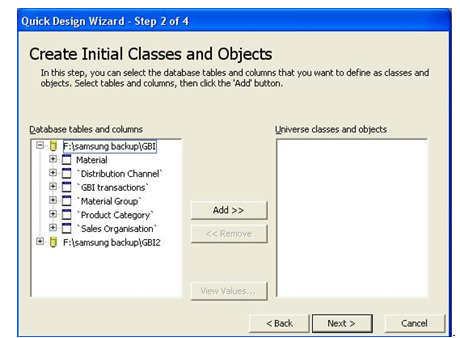 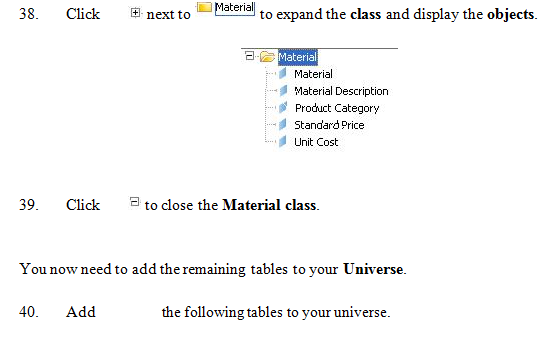