MySQL is a database management system

A database is a structured collection of data. It may be anything from a simple shopping list to a picture gallery or the vast amounts of information in a corporate network. To add, access, and process data stored in a computer database, you need a database management system such as MySQL Server.

A relational database stores data in separate tables rather than putting all the data in one big storeroom. This adds speed and flexibility. SQL is the most common standardized language used to access databases and is defined by the ANSI/ISO SQL Standard. The SQL standard has been evolving since 1986 and several versions exist. In this manual, “SQL-92” refers to the standard released in 1992, “SQL:1999” refers to the standard released in 1999, and “SQL:2003” refers to the current version of the standard. We use the phrase “the SQL standard” to mean the current version of the SQL Standard at any time.

Open Source means that it is possible for anyone to use and modify the software. Anybody can download the MySQL software from the Internet and use it without paying anything. If you wish, you may study the source code and change it to suit your needs.

They started out with the intention of using the mSQL database system to connect to our tables using our own fast low-level (ISAM) routines. However, after some testing, we came to the conclusion that mSQL was not fast enough or flexible enough for our needs. This resulted in a new SQL interface to our database but with almost the same API interface as mSQL.

MySQL is named after co-founder Monty Widenius's daughter, My.

The name of the MySQL Dolphin (our logo) is “Sakila,” which was chosen from a huge list of names suggested by users in our “Name the Dolphin” contest. The winning name was submitted by Ambrose Twebaze, an Open Source software developer from Swaziland, Africa. According to Ambrose, the feminine name Sakila has its roots in SiSwati, the local language of Swaziland. Sakila is also the name of a town in Arusha, Tanzania, near Ambrose's country of origin, Uganda.

The Main Features of MySQL

Why companies are preferring MySQL ?

Before MySQL doesn't supported stored procedures, functions, triggers, views, subqueries and partitioning. But now they are supported. Small and middle level companies are relied on MySQL because it is opensource. Supports replication and clustering for High Availability.

The MySQL database system operates using a client/server architecture. The server is a central program that manages database contents, and client programs connect to the server      to retrieve or modify the data. MySQL also includes non-client utility programs and scripts.

MySQL Server: This is the mysqld program that manages database and tables. Most users choose binary MySQL distribution that includes a server ready to run with the capabilities they need, but it's also possible to compile MySQL from source. 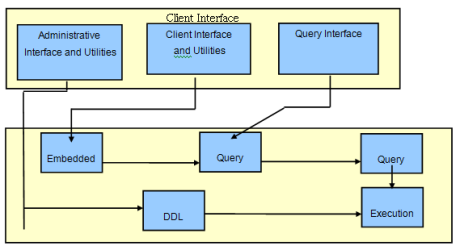 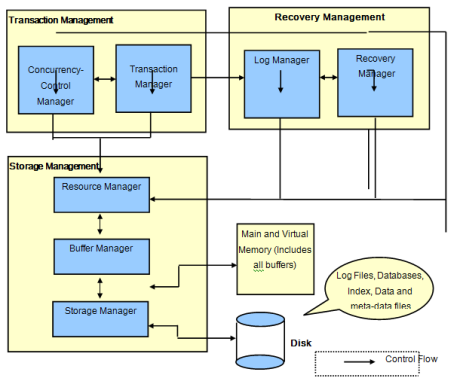 Non-client utility programs: These are programs that generally used for special purposes and do not acts as clients of the server. They do not connect to the server, for example mysqld_safe is a script for starting and stopping the server. Myisamchk is a standalone utility for table check and repair.

This is where the client interact with the RDBMS. This layer is used by three users:

i) Administrative Interface and Utilities

This layer is used by Administrator. This includes utilities such as mysqladmin, myisamchk, mysqldump etc.

This layer is used by the clients to communicate with RBDMS. The client interface uses MySQL APIs for various different programming languages such as the  PHP API, Java API, etc.

All ths DML statements that are sent from the application layer are parsed and optimized in the query processor.

It is again sub-divided into following layers:

When a request is received from a client in the application layer, it is the responsibility of the embedded DML (Data Manipulation Language) precompiler to extract the relevant SQL statements embedded in the client API commands, or to translate the client commands into the corresponding SQL statements.

If the query syntax is right then it is sent to the next pipe . Else it inform to the client with an a error message.

The log manager is responsible for logging every operation executed in the database. It does so by storing the log on disk through the buffer manager. The operations in the log are stored as MySQL commands. Thus, in the case of a system crash, executing every command in the log will bring back the database to its last stable state.

Storage is physically done on some type of secondary storage, however dynamic access of this medium is not  practical. Thus, all work is done through a number of buffers. The buffers reside in main and virtual memory  and are managed by a Buffer Manager.

The storage manager acts as a mediator to send request between buffer manager and secondary storage.