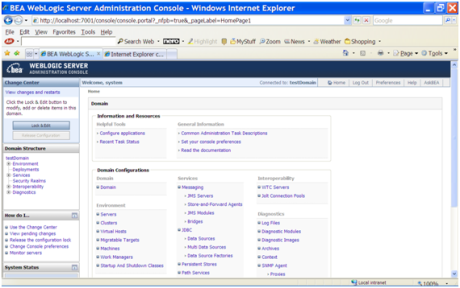 3) How do I... This panel includes links to online help tasks that are relevant to the current Console page.

4) Tool Bar The tool bar at the top of the Console includes the following elements:

Welcome message: Indicates user name which you have logged into the Console. Connected to:  The IP address and port you used to connect to the Console. Home:  A link to the top page of the Console. Log Out:  Click to log out of the Console. Preferences:  A link to a page where you can change some Console behavior. Help: A link to the Administration Console Online Help. AskBea:  A Link to Support Team.   5) Breadcrumb Navigation A series of links that show the path you have taken through the Administration Console’s pages. You can click on any of the links to return to a previously-visited page. Ex: Home > Summary of Servers > examplesServer   6) System Status The System Status panel reports on the number of information, error, and warning messages that have been logged. You can view these messages in the server log files, which you can access from the Administration Console at Diagnostics > Log Files.   7) Advanced Options in Console

Dynamic and Non-Dynamic Changes   Some changes you make in the Administration Console take place immediately when you activate them. Other changes require you to restart the server or module affected by the change. These latter changes are called non-dynamic changes. Non-dynamic changes are indicated in the Administration Console with this warning icon.   Using the Change Center   The Change Center provides a way to lock a domain configuration so you can make changes to the configuration while preventing other accounts from making changes during your edit session.   The domain configuration locking feature is always enabled in production domains. It can be enabled or disabled in development domains. It is disabled by default when you create a new development domain.   To change a production domain’s configuration, you must:     Undoing Changes  You can revert any pending (saved, but not yet activated) changes by clicking Undo All Changes in the Change Center. You can revert any individual change by going to the appropriate page in the Administration Console and restoring the attribute to its previous value.     Releasing the Configuration Lock  You release the configuration lock as follows: Stopping the Administration Server does not release the configuration lock. When the Administration Server starts again, the configuration lock is in the same state it was in when the Administration Server was shut down, and any pending changes are preserved.   Enabling the Administration Console By default, the Administration Console is enabled. If you disable it, you can re-enable it using the WebLogic Scripting Tool (WLST). Start the Administration Server, then invoke WLST and use the following commands: connect("username","password") edit() startEdit() cmo.setConsoleEnabled(true) save() activate() The following attribute(s) have been changed on MBeans which require server re-start. MBean Changed : com.bea:Name=mydomain,Type=Domain Attributes changed : ConsoleEnabled Activation completed disconnect() exit()   The Command Line Interface (WLST) The WebLogic Scripting Tool (WLST) is a command-line scripting environment that you can use to create, manage, and monitor WebLogic Server domains. It is based on the Java scripting interpreter, Jython. In addition to supporting standard Jython features such as local variables, conditional variables, and flow control statements, WLST provides a set of scripting functions (commands) that are specific to WebLogic Server.   Using WLST Online or Offline You can use WLST as the command-line equivalent to the WebLogic Server Administration Console (WLST online) or as the command-line equivalent to the Configuration Wizard (WLST offline).   Using WLST Online You can use WLST to connect to a running Administration Server and manage the configuration of an active domain, view performance data about resources in the domain, or manage security data (such as adding or removing users). You can also use WLST to connect to Managed Servers, but you cannot modify configuration data from Managed Servers.   Using WLST Offline Without connecting to a running WebLogic Server instance, you can use WLST to create domain templates, create a new domain based on existing templates, or extend an existing, inactive domain. You cannot use WLST offline to view performance data about resources in a domain or modify security data (such as adding or removing users).   Modes of Operation   Main Steps for using WLST   1) Setting Up Your Environment   2) Invoking WLST – java weblogic.WLST – A welcome message and WLST prompt appears: wls:/(offline)> – To Connect online:connect('username','password','t3s://localhost:7012') – To shut down a server: shutdown('myserver','Server','false',1000) – To exit WLST: exit()   3) Requirement for Entering WLST commands   4) Running Scripts:   5) Import WLST as a Jython Module Invoke WLST:  c:\>java weblogic.WLST wls:/offline> Use the writeIniFile command to convert WLST definitions and method declarations to a .py file: wls:/offline> writeIniFile("wl.py") Open a new command shell and invoke Jython directly by entering the following command: c:\>java org.python.util.jython Import the WLST module into your Jython module using the Jython import command: >>>import wl Now you can use WLST methods in the module. For example, to connect WLST to a server instance: wl.connect(’username’,’password’)   6) Exiting WLST Exit WLST: wls:/mydomain/serverConfig> exit() Exiting WebLogic Scripting Tool ...   WLST Example 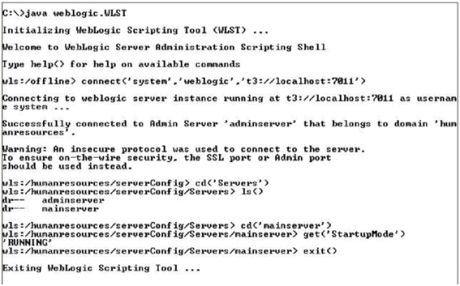 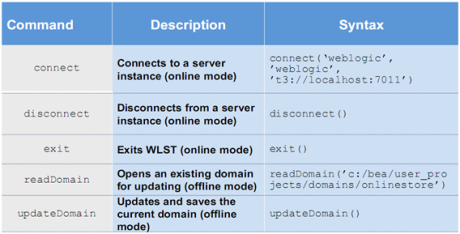