At the end of this chapter you will be able to:

What Node Manager Can Do

Node Manager can be used to:

WebLogic Server provides two versions of Node Manager, Java-based and script-based, with similar functionality. However, each version has a different configuration and security considerations.

It is recommended that you run a script-based Node Manager as an operating system service, which allows it to restart automatically when the system is rebooted.

Determining Which Node Manager Version to Use

Which version of Node Manager to use depends on the requirements of your WebLogic Server environment. The following considerations can help you decide which version is ideal for your environment:

A Node Manager client can be local or remote to the Node Managers with which it communicates. You access either version of Node Manager—the Java version or the script-based (SSH) version—from the following clients:

How Node Manager Works in the WebLogic Server Environment

The following diagram specifies the relationship between Node Manager, its clients, and the server instances it controls. 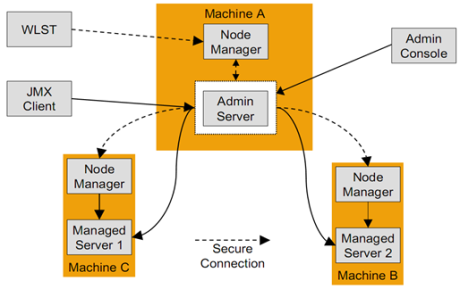 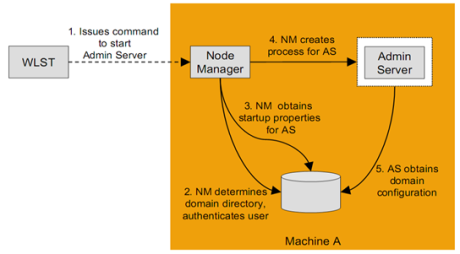 Note: If the user has previously connected to the Node Manager, a boot.properties file exists, and the user does not have to supply a username and password.

2 & 3. Node Manager looks up the domain directory in nodemanager.domains and authenticates the user credentials using a local file that contains the encrypted username and password. 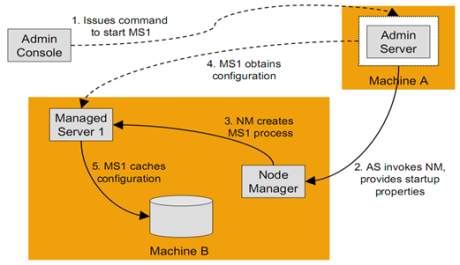 Note: A stand-alone client can also issue a start command for a Managed Server. 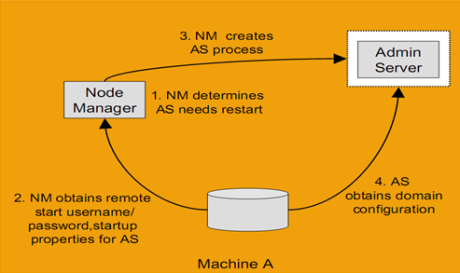 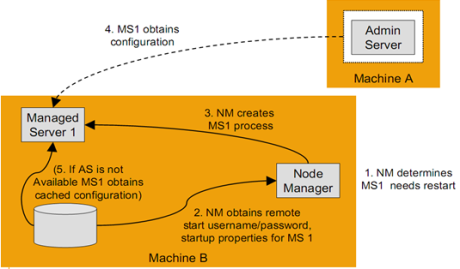 Note: Node Manager waits for RestartDelaySeconds after a server instance fails before attempting to restart it. 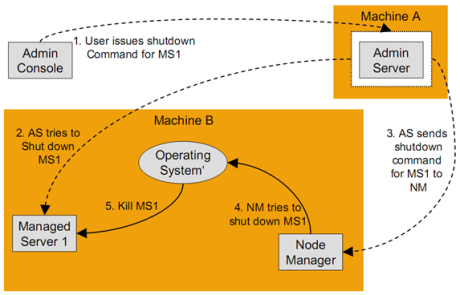 Except where noted, configuration files apply to both Java-based and script-based Node Manager. 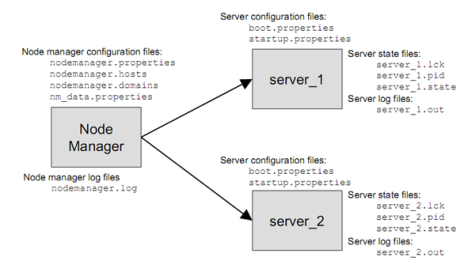 This is the configuration file used by the Java-based version of Node Manager. This file is located in WL_HOME/common/nodemanager, where WL_HOME is the location in which you installed WebLogic Server.

This file contains mappings between the names of domains managed by Node Manager and their corresponding directories. This file is located in WL_HOME/common/nodemanager.

This file stores the encryption data the Node Manager uses as an asymmetric encryption key. The data is stored in encrypted form. This file is located in WL_HOME/common/nodemanager.

This file stores the Node Manager username and password. This file is located in DOMAIN_HOME/config/nodemanager.

Node Manager uses this file to specify user credentials when starting a server. This file is located in DOMAIN_HOME/servers/<server_name>/data/nodemanager.

Note: Do not delete or alter this file. Without this file, the Node Manager cannot determine the current state of the server.

Use the Node Manager and WebLogic Server log files to help troubleshoot problems in starting or stopping individual Managed Servers.

DOMAIN_HOME/servers/<server_name>/logs/<server_name>.out, where DOMAIN_HOME is the location in which you installed your WebLogic Server domain, such as d:beauser_projectsdomains<domain-name>

Check out our Related Courses