Playing system sounds Playing songs Using the Media Player to interact with a device’s multimedia Playing video Up until the release of the iPhone OS 3.0, the iPhone was a difficult platform for developing multimedia applications. The capabilities were there, as you could always resort to using low-level C APIs to program audio and video, but the higher-level APIs were strictly undocumented and off limits. And as for the multimedia on a device that was placed there by iTunes? Forget it, off limits. Any media you wished playing in your application had to either be packaged as part of your application or streamed from a server. That restriction changed with iPhone OS 3.0; now you can access and play a user’s audio iTunes multimedia, making the iPhone and iPod touch the most programmable portable music players ever released.In this chapter, you explore the basic multimedia capabilities of the iPhone and iPod touch. You first learn how to play system sounds and longer sounds. You then move to the Media Player framework, where you use the framework to select and play a user’s iTunes audio multimedia. After learning to play iTunes media, you then learn how to play a video using the Media Player framework’s video player.

Playing short sounds on an iPhone or iPod touch is easy. Simply load the song as a system sound, obtain the sound’s id, and use the AudioServicesPlaySystemSound method to play the sound. Playing a longer sound using the AVAudioPlayer is not difficult, but a little more involved. However, there is one important limitation you must realize when using sound on your device using the AudioServicesPlaySystemSound function or AVAudioPlayer: Any media you play must be packaged as part of your application or must be streamed from a server. So, although these two classes are good for adding sound to your application or for developing an interface to a server that streams multimedia, they are not good classes for developing a music player. Instead, you should use the Media Player Framework, covered later in this chapter.

Q: What’s a CFURLRef? What’s an NSURL? A: A CFURLRef is a reference to a CFURL object. A CFURL is part of the Core Foundation framework, meaning it is C, not Objective-C, and provides functions to create and parse URLs. An NSURL is a higher-level, Cocoa Objective-C class for working with URLs. It encapsulates a URL and provides many functions for manipulating URLs. Refer to the NSURL Class Reference for more information. You can cast an NSURL * as a CFURLRef because of Apple’s ―toll-free bridging‖ functionality. The term ―toll-free bridging‖ refers to certain Core Foundation types being interchangeable with their higher-level Cocoa counterparts. Remember, a pointer to an NSURL is equivalent to a CFURL reference. TIP You can use the AudioServicesPlaySystemSound to vibrate a user’s iPhone. Pass the kSystemSoundID_Vibrate identifier constant to the function. Currently, only the iPhone can vibrate; this code does not do anything on an iPod touch. AudioServicesPlaySystemSound(kSystemSoundID_Vibrate);

The AVAudioPlayer plays sounds. The audio player does not have the limitations of the AudioSer vicesPlaySystemSound function. It can play any length sound, loop a sound, play multiple sounds at the same time, and allows control over a sound’s volume. Methods you might use include prepareToPlay, play, pause, and stop. Each method’s functionality should be intuitive. Notice that prepareToPlay and play return a BOOL, so you can evaluate if the call was successful.

You can initialize an AVAudioPlayer with data or a URL. The initWithData:error: function initializes an audio player using data encapsulated in an NSData object. The initWithContentsOfURL:error: initializes an audio player using the sound file referenced by the URL. That sound file can be in your application’s bundle, or it can be a resource on a server and streamed. If streamed, note that the prepareToPlay method discussed previously takes more importance, as it buffers the content and helps lessen a user’s wait when playing an external resource.

Properties you might use include the currentTime, data, delegate, duration, playing, volume, and numberOfLoops. The currentTime property returns the playback in seconds as an NSTimeInterval. The duration property returns a sound’s duration in seconds as an NSTimeInterval. The volume returns the player’s playback gain as a float between 0.0 and 1.0. The playing property returns a BOOL, while the numberOfLoops property returns an unsigned int. There are also more advanced properties, such as numberOfChannels and peakPowerForChannel. For a more complete listing of AVAudioPlayer’s properties and methods, refer to the AVAudioPlayer Class Reference. An AVAudioPlayer’s delegate property refers to an audio player’s AVAudioPlayerDelegate protocol. As with all protocols, you implement a custom class that adopts the protocol. Protocol methods you might implement are listed in Table 18-1.

Playing a Sound and an MP3

This task is straightforward; first, you loaded the sound and obtained its id. As system sounds are 30 seconds or less, loading it into memory and keeping it there should not tax your device’s memory. Notice you do not load the longer song into memory until you actually play it in the playSong method, as it takes more memory.You initialize the system sound in the viewDidLoad method. Don’t let the one line of code be intimidating; it’s actually doing something quite simple. It gets the path to the file, creates an NSURL using the path, casts it as a CFURLRef, and creates a system sound from the resource.The playSong method creates a new AVAudioPlayer instance every time the application calls it. If an error occurs, the method logs the error; otherwise, it plays the song. When the song is finished playing, it calls the audioPlayerDidFinishPlaying:successfully: method and releases the player. 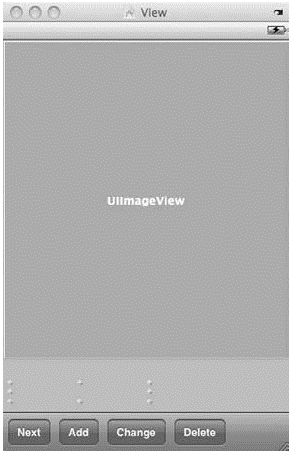 } @end NOTE The mp3 song is entitled The Charleston, and is a digital copy of the 1925 recording. I obtained the mp3 from the Internet Archive’s 78RPMS & Cylinder Recordings Collection. The mp3 is licensed under the Creative Commons Commercial license. The burp_2.aif is also public domain. Hopefully, I am not violating any software patents by playing burp sounds on a mobile device...

An MPMediaLibrary class represents a device’s multimedia library loaded from iTunes. An MPMediaItem object represents every multimedia item in the media library. The MPMediaItem class contains metadata such as title, artist, and length about a media item.When working with the MPMediaLibrary, you usually execute an MPMediaQuery that returns an MPMediaItemCollection. Although the Media Player framework offers several methods for accessing a device’s media programmatically, another way is by using an MPMediaPickerController. An MPMediaPickerController is a class that presents a view much like the current iPod application. A user can then select one or more media items, and the picker returns an MPMediaItemCollection.After selecting the media items to play, you pass them to an MPMusicController to play. The MPMusicController class is responsible for playing music, rewinding, forwarding, and other playback functionality.

The MPMediaPickerController class manages the media picker view. Like the UIImagePickerController, you present this controller’s view as a modal view that overlays the currently displaying view. [self presentModalViewController:mediaController animated:YES]; You can initialize a media picker to only display certain media types using the initWithMediaTypes method. This method takes an MPMediaType; valid types are MPMediaTypeMusic, MPMediaTypePodcast, MPMediaTypeAudioBook, and MPMediaTypeAnyAudio. Notice there is no MPMediaTypeVideo; you cannot select or play an iTunes-loaded video.You can also initialize a media picker to allow a user to select multiple items by setting the allowsPickingMultimediaItems property to YES. If you don’t set this property, its default value is NO. 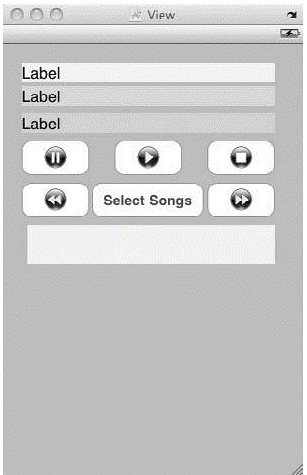 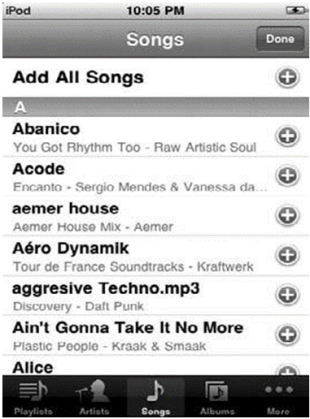 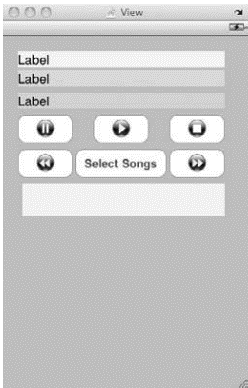 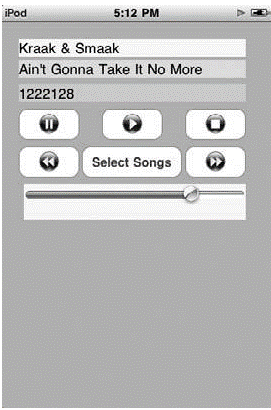 Figure 18-3 The application running on an iPod touch

The MPMoviePlayerController plays video bundled as part of your application. It can also stream video from a server. However, despite its name, it cannot use video loaded on a user’s device by iTunes. The MPMoviePlayerController presents a modal, full-screen video when it plays. You can only minimally modify its appearance using properties. What you can change are a movie player’s background color, a movie’s scaling, and the controls presented to the user when playing a movie. You change a movie’s background color using the backgroundColor property. You change a movie’s scaling using the scalingMode property, and you change the controls presented using the movieControlMode property. The backgroundColor property changes the movie player’s background color when playing a movie. For instance, when you watch a video using the Video application on an iPod touch, the background is black. If you wish, you can change that color using this property. The scalingMode property changes a movie’s scaling. Valid values for scalingMode are MPMovieScalingModeNone, MPMovieScalingModeAspectFit, MPMovieScalingModeAspect Fill, and MPMovieScalingModeFill. The movieControlMode property determines the visible controls when a movie plays. For instance, when playing a movie using the Video application, if you tap the screen, it presents a control showing the volume, a control showing the location in the video, a scaling control, and a Done button. You can modify which control a player presents using this property. Valid values are MPMovieControlModeDefault, MPMovieControlModeVolumeOnly, and MPMovie ControlModeHidden. You initialize a movie player using the initWithContentURL: method. This method takes an NSURL to the movie’s location. This location must be within your application’s sandbox or available via an Internet server (it’s a URL). After initializing the player, you call the prepareToPlay and play methods. If you wish to be notified that the player has stopped playing, you register as a notification listener, listening for the player’s MPMoviePlayerPlay backDidFinishNotification notification.

Like the music player, you register to listen to the finished playing event in the viewDidLoad method. Notice that unlike the previous task, you didn’t place the event’s name in quotations. This omission was intentional. The event and the event’s NSString name are the same, and you can use either. The viewDidLoad method also initializes the movie player with the short.3gp movie’s location. In a real- world application, loading a movie when a view loads is probably not a good idea, as movies are usually quite large.When a user taps the button, the movie player begins playing the movie in landscape mode (Figure 18-4). Upon tapping the Done button, the user returns to the application’s view in portrait mode. The controller also receives the notification that the player stopped playing and releases the player. Listing 18-9 MovieplayerViewController.h #import <UIKit/UIKit.h> #import <MediaPlayer/MediaPlayer.h> @interface MovieplayerViewController : UIViewController { MPMoviePlayerController * movieplayer; } @property (nonatomic, retain) MPMoviePlayerController * movieplayer; -(IBAction) playMovie: (id) sender; - (void) playingDone; @end 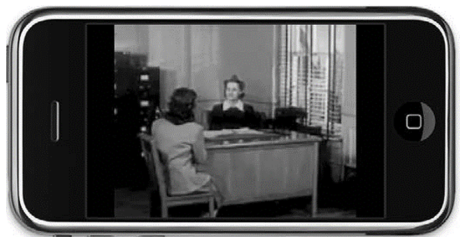