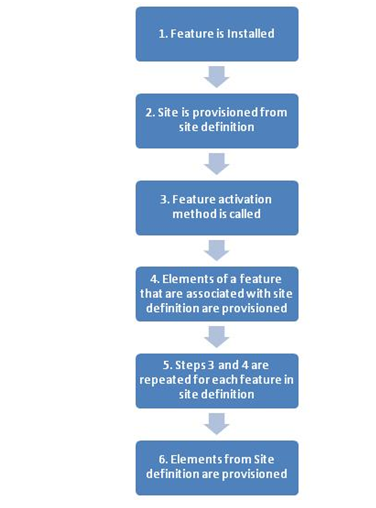 Learning the Basics of Events in SharePoint Foundation 2010

An event receiver in Microsoft SharePoint Foundation 2010 is simply a method that is called when a triggering action occurs on a specified SharePoint object. Triggering events include actions such as adding, updating, deleting, moving, checking in, and checking out. SharePoint objects that listen for events—that is, event receiver hosts—include objects such as site collections, sites, lists, and workflows. Events are valuable tools for SharePoint developers. When a user performs an action that affects a SharePoint site, you can trap that action and respond to it with custom code. For example, if a project manager needs to be alerted when new documents or files are added to a given document library, you could write event receiver code to send an e-mail notification to the project manager, and then bind that code to the item-addition action on the document library. SharePoint Foundation 2010 provides enormous flexibility for detecting and responding to SharePoint events.

Events were first introduced in Windows SharePoint Services 2.0 but initially were supported only on document libraries. SharePoint events then were referred to as event sinks. In Windows SharePoint Services 3.0, the SharePoint events infrastructure took its current form, using managed event receivers. Event receivers improved on event sinks in several ways. They are easier to use; they have more event types; and they are supported on lists, content types, workflows, and sites. In SharePoint Foundation 2010, new list and web events were introduced; additionally, site collections can now act as event hosts, After events can now be synchronous, and event cancellation and impersonation has improved.

How SharePoint Events Work: All You Need to Know in One Paragraph

Where Can I Use Event Receivers?

If you want to add behaviors to the operations that happen in SharePoint, you can use event receivers to trigger your custom code whenever a certain operation takes place. Table 1 lists the various operations on which you can plug your custom code.

What Are Event Receivers?

What Are Event Hosts?

In addition to the fundamental pieces of the event model—event receivers, event hosts, and the events themselves—the following are key concepts in the landscape of the SharePoint event model. Before Events A Before event occurs before the currently requested operation happens. For example, the ItemAdding event is a Before event that is raised before an item is added to a SharePoint list. Looked at another way, Before events are raised when an action occurs before SharePoint writes to the content database. This provides an opportunity for an event receiver to perform tasks before data is committed to a database. A good example of the use of Before events is performing data validation, because Before events fire prior to commitment of data. You can also use Before (or synchronous) events to cancel user actions—for example, if data validation fails. Event receiver code that is triggered by a Before event executes in the same thread as the code that is executing the user action that triggered it. For this reason, Before events are always synchronous. You can identify Before events because their member names end with the "-ing" suffix—ItemAdding, ListAdding, and so forth. After Events An After event is raised after the currently requested operation happens. For example, the ItemAdded event is an After event that is raised after an item has been added to a SharePoint list. After events trigger event receivers that execute after user actions are committed to the content database; they invoke code that runs after the content database has been modified. This allows you to execute logic that occurs after a user has completed a specific action. After events can execute either synchronously or asynchronously. If the After event is synchronous, it executes in the same thread in which the triggering action occurs. However, if the After event is asynchronous, it executes in a separate thread. You can identify After events because their member names end with the "-ed" suffix—ItemDeleted, WebProvisioned, and so forth. Synchronous Events A synchronous event is executed in the same thread in which the triggering action is occurring. For example, when the user adds an item from the SharePoint user interface, the event is fully executed before returning to the user and showing that the item was added. All Before events are synchronous events. Asynchronous Events An asynchronous event occurs at a later time than the action that triggered it, and it executes on a thread that is different from the one in which the triggering action is running. For example, when a user adds an item to a document library by using the SharePoint user interface, the event starts to execute before returning control to the user; however, there is no guarantee that the event receiver will finish executing before we show the user that the item has been added.