What are the differences between Personal, Shared and Secured connections?

What are custom hierarchies? How can they be created?

Custom Hierarchies are defined in a universe in order to facilitate custom drill down between items from same or different classes according to user requirement. They can be created from Tools --> Hierarchies in the BO Designer. 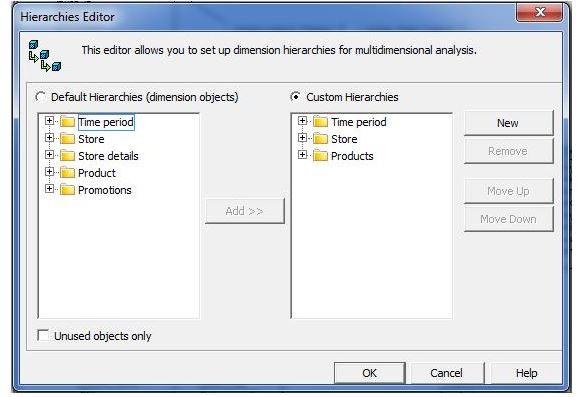 What is a text in-universe? How are they created?

In an universe, a context defines a particular join path between tables or a distinct group of joins for a precise query. Any objects created on a table column which belong to specific contexts is naturally compatible with all other objects from same contexts. When objects from two or more contexts are used, separate SQL is generated and results are then merged in a clone cube. This makes sure that no improper result is generated due to loop or anyone join path issue.

Contexts may be created using detect contexts feature or manually. They are generally created based on logical calculation and business requirements, hence the identify context method is not very effective. To manually create a context Go to Insert  Context, give the context name and select the joins that should be present in the context. For a universe contexts should be created in a way that all joins(except shortcut joins) fall in at least one context 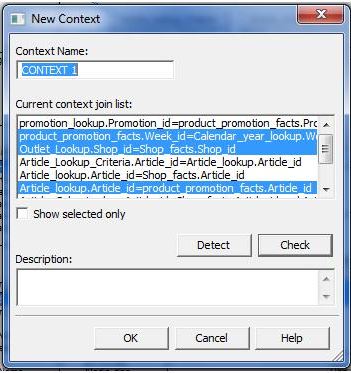 What is a chasm device? How can it be solved?

A chasm trap can be solved using 2 approachs:

- Modern universe SQL parameters, the option, generate multiple inquiries for each measure demands to be selected. This will generate separate SQL statement as each measure and give the proper results. However, this method would not work, if a dimension (for example date) occurs multiple times in the result set due to chasm trap. 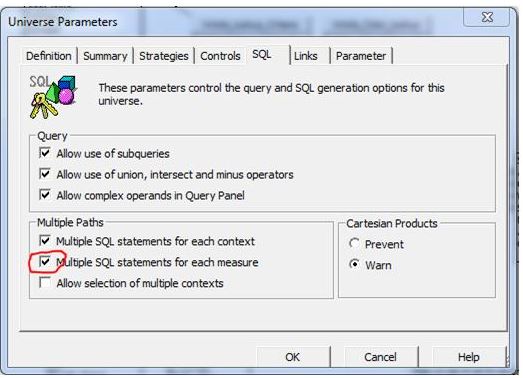 - A better path is to put the two joins in two different contexts. This will generate two integrated queries, thus solving the problem.

What is a fan trap? How can it be solved?

In a universe structure, we may have 3 tables joined in such a way that, the 1st table has a one to many join with the 2nd table, which in turn has a one to many join with the 3rd table(A -< B -< C). In such a scenario, if a measure is present in the 2nd table and it is dragged along with any dimension from the 3rd table, the value of the measure will be inflated. Such a condition is known as a fan trap.

Should we encounter fan traps in a data warehouse scenario? If so, then how?

If a data warehouse is based on the Kimball model, it is a dimensional schema. In a universe built on that DW, for a fan trap to occur in such a schema, we require direct join between two fact tables, which is against the principles of dimensional modeling.

On the other hand in a data warehouse based on Inmon model, it is a normalized schema. Though in such a case, universes are generally designed on Data Marts, which are dimensional schemas (where fan traps should not occur). However, if a universe is built on the DW (for the purpose of operational reporting), then a fan trap can occur in that universe

What is aggregate awareness? What is its advantage?

Aggregate awareness function is used in scenarios where we have same reality tables in various grains. Using this function we can define only one item for the measures in the fact tables as

We also need to define dimensions for associated granularities and define their incompatibilities with the corresponding facts through the aggregate navigation. This is accesses through Tools -> Aggregate Navigation 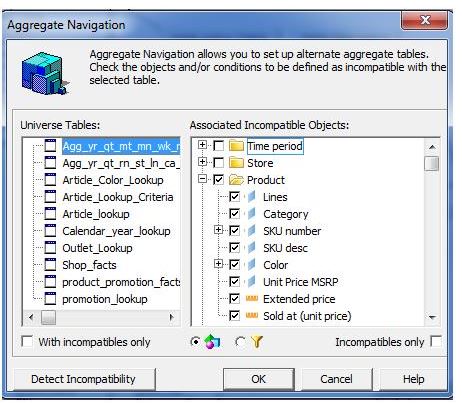 The advantage is that in a Webi or Deski report when one drags the measure object with the dimension object of a particular granularity, the measure column from the Fact table of the corresponding granularity is selected in the BO default Query. If we did not use aggregate awareness, we would need to define separate objects for each of the fact tables which would be difficult to understand from a user’s point of view.

What are the 2 different approaches of implementing aggregate awareness? Which one is better in terms of performance?

The 2 approaches are as follows:

The first approach is better in terms of performance, since for the higher levels of aggregation, all the information is obtained for a single table. However, a large scale implementation of this approach in a dimensional schema is difficult. In most BI projects, the second approach is preferred

What is a derived table? What is its utility?

Another use of derived table can be to access tables from a different schema through a dblink. 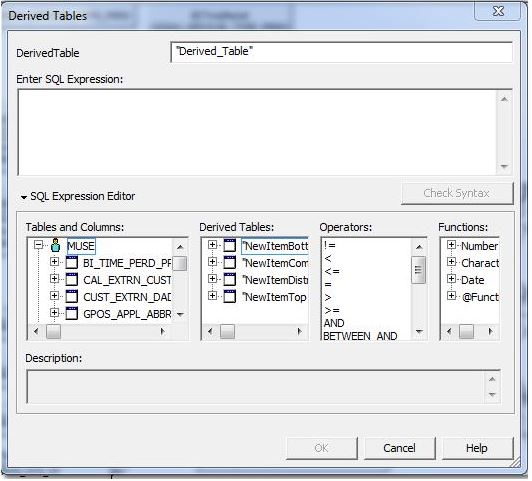 How is a derived table different from a view? Which one is a preferred solution?

A derived table is present only in the universe level, while a view is created in data base level. Generally views are preferred since, in its case the onus of calculation remains on the database and it does not load the BO server. However, in cases where developers do not have access to database, derived table is the only solution.

What is Index Awareness? How is it implemented?

Index awareness is a property of the universe, by means of which values in the filter conditions of the queries/data providers built from the universe, are substituted by their corresponding indexes or surrogate keys. Generally the values in the filter condition come from a dimension table (like country etc) and we require a join with the fact table to get this value.

However, if index awareness is implemented, this join is eliminated and the query filter takes the equivalent index value from the fact table itself.

To implement index awareness, one needs to identify the dimension fields which are to be used in query filter. In the Edit Properties of the object, we get a Keys tab. In this tab, the source primary key of the table from which the object is derived needs to be defined as primary key, and the database columns for all foreign key relationships with the other tables also need to be defined here. Once this is done for all required dimensions, the universe will become index aware 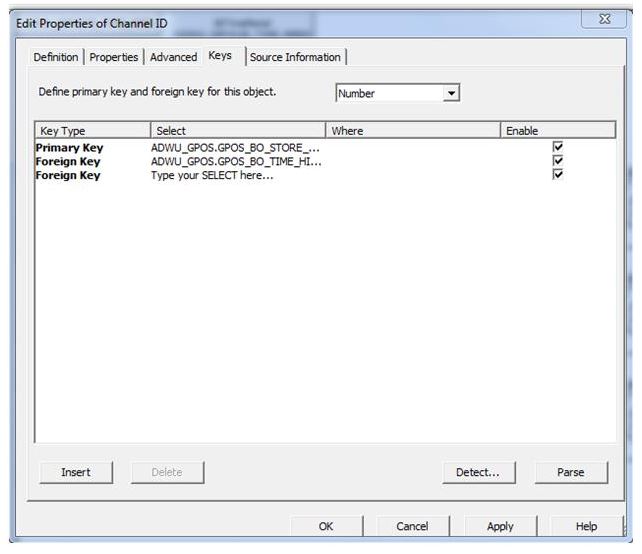 How can we use index awareness in universe prompt?

An extended prompt syntax is available since BO 3.1. It is as follows

If the indexes for the dimension object is defined in the universe and we define the prompt condition on the object with the clause ‘primary key’ in place of free or constrained, then the filter condition will convert the prompt values entered to their corresponding indexes and eliminate the join with the dimension table