SAP NetWeaver Process Integration (SAP PI) is SAP's enterprise application integration (EAI) software, a component of the NetWeaver product group used to facilitate the exchange of information among a company's internal software and systems and those of external parties.

SAP offers not only links to SAP product documentation but also links to related information. All links are categorized for transparency:

If you want to enrich your career and become a professional in SAP PI, then visit Tekslate - a global online training platform: "SAP PI Training"   This course will help you to achieve excellence in this domain.

The architecture of SAP PI 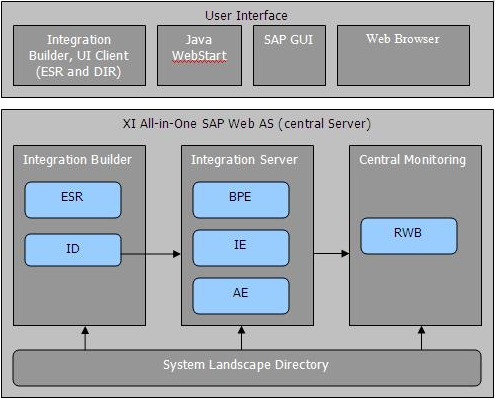 The SAP PI consists of a hub and spoke structure; the spokes connect with external systems while the hub exchange messages between them. The source system is known as the sender system and the target system is known as the receiver system. The PI is not a single component, but rather a collection of components that work together flexibly to implement integration scenarios. The architecture includes components to be used at design time, at configuration time, and at run time.

We can divide the SAP PI into several areas

Integration Server is the central processing engine of the SAP PI. All messages are processed here in a consistent way. It consists of three separate engines

The integration engine can be considered to be the hub and the Adapter engine the spoke. Regarding the Business Process Engine, I will explain it later.

Integration Builder is a client-server framework for accessing and editing integration objects and it consists of two related tools:

Two together, we built integration processes which are commonly called scenarios.

The System Landscape is a central repository of information about software and systems in the data center and simplifies the administration of your system landscape.

In Configuration and Monitoring, we can monitor the messages and adapters.

When PI was first released, not all components were built on the same platform. Integration Engine and Business Process Engine was built in ABAP while Adapter Engine, Integration Builder, SL, CM, and Mapping Runtime were built in Java. So PI needs both the Java and the ABAP environment to run and is known as the dual-stack.

But in the later version, all the components are built in Java. Some of the dual-stack components are either dispensed off or modified to work on the Java stack. So PI needs only the Java environment to run and is known as the single stack.

The Integration Engine is responsible for central Integration Server services i.e. the pipe-line steps - routing and mapping. If the source message structure is different from the target message structure, then the integration engine calls the Mapping Runtime, where the source structure is converted to the target structure. The Mapping Runtime is based on the Java stack.  The integration engine can also utilize an ABAP program for the conversion, which is based on the ABAP stack.

A message can be of two types

In PI, the message is represented by an interface.

Interface -> structure of the message in XML format + direction

Based on the above criteria, there are three types of interfaces

When we configure integration logic (scenario) in the SAP PI as per our business requirements, it is the integration engine that executes that configuration in a step-wise manner. The pipeline is the term used to refer to all steps that are performed during the processing of an XML message. The pipe-line steps consist of the following:

You must have noticed earlier that the integration engine handles messages in XML-SOAP protocol only. But what if we have a sender and a receiver business system where the data is not in the same format. We use the various adapters in the Adapter Engine to convert XML- and HTTP-based messages to the specific protocol and format required by these systems, and vice versa.

When SAP PI moved from dual-stack to single stack than these two adapters became part of the Java stack. The modified adapter engine is known as the Advance Adapter Engine and the two adapters are called the IDOC_AAE adapter and HTTP_AAE adapter respectively.

The Business Process Engine is responsible for executing and persisting integration processes.

Build a scenario in SAP PI

We start from the Home page if we have to build a scenario in PI.

The home page will look similar to as given below: 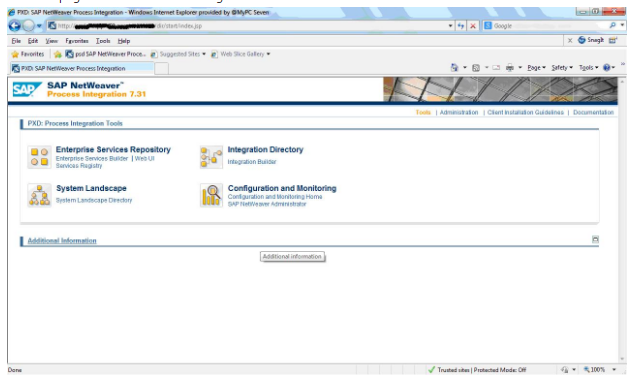 The Home page has hyperlinks to the following 4 working areas:

Each hyperlink will open one application. All these four are Java applications. ESR and ID are swing applications. They are launched from the browser-based on JNLP. So for the first time, it takes more time as it downloads the entire library file. But from the second time onwards, it takes less time to launch. SL and CM are pure web applications and run on the browser.

Here we design and create objects to be used in the making of an integration scenario. The data flow in PI will look similar to as shown below:

We find the option to design the following: 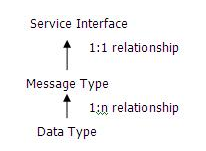 PI uses an integration repository to design message structure for both sender and receiver systems and develop an interface message using corresponding message structures that act as a point of interaction to the outside world. Data type and Message type are used to simplify and modularize the design of a complex interface.

Graphical mapping is the most used as it allows the developer to map attributes of both structures graphically to pass data using service interfaces. For the other three, we have to develop the mapping by writing code. If it is a single stack server, then the ABAP mapping will not be available.